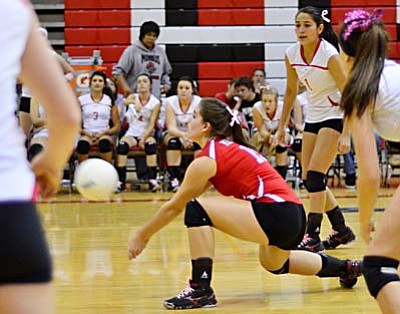 Senior Holly Drake led the Marauders with 12 kills in the final match at home. Seniors Bailey Mabery, Delaney Scanlan, Kalina Boysen, and Holly Drake stepped up to beat the Scorpions.

"Bailey Mabery played the best game she has her entire life," said Mingus head coach Brian Herman. "She came through in the most important match of our season. Holly did an amazing job with very few errors in game one and two. Delaney was back to her old self, running the offense the way we need her to. And Kalina had some really key kills in game one and game five -- she had one hit that bounced off a girl's face. The seniors knew it was their last game and they played hard."

Nothing came easy for either team in the cross-valley match -- both squads played great defense, but Mingus edged out the Scorpions with desire.

"It feels great to go out with a bang on senior night playing a rival team -- we left it all out on the court," said Mabery.

The win against Sedona highlights the Marauders are playing their best volleyball right now. If you take away the five-game loss in Snowflake without Mabery, Mingus would be on a seven-game win streak, including quality wins over Sedona and Northwest Christian, two real deal programs.

Delaney Scanlan, Bailey Mabery, and Angel Chavez have played varsity for the last three seasons. They all play full rotations this year. Senior outside hitter Holly Drake improved consistency and looks mentally focused. Junior Laura Wylie holds down the back row better than any Marauder in recent memory. Talented middles Tristen Meacham, Sarah Cochrane, and Kalina Boysen utilize plenty of varsity experience to set up a formidable block and factor into a dynamic offense.

"I think this is the best team we've had since I've been here," said Mabery. "Playing a lot together has helped up -- we play together in the off season -- we all knew, even coming in as freshmen, that this would be the year we could go far at state and contend for a title. It's great to play with all these girls."

Mingus earned a 10 seed and plays Catalina Friday at noon in Tim's Toyota Center. The entire state tournament will take place at Tim's over Friday and Saturday.