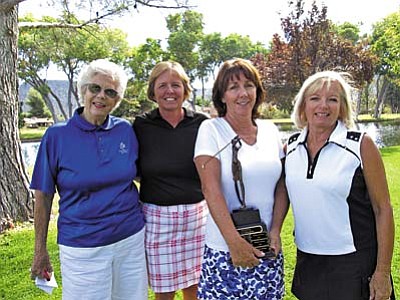 The highlight of October was the OCCWGA Ladies Club Championship, played over three rounds. The winner, Lori Zaun, shot a combined score of 247, and runner-up Donna Cantello, was 257.

Do the math and see that these scores represent an average of low to mid 80s per round. These women have talent, but they also love the game and work hard at it.

They are often seen on the driving range and probably more often on the short-game facility, where the game is “honed." They know it’s one thing to hit the ball and it’s another to make shots. And shot-making takes practice. Well done!

In order to encourage as much participation as possible, Club Championships are often flighted, In this case, the event had three flights.

Lori, with lowest overall score, is Club Champion, and Donna, is the winner of Flight A. Flight B winner was Dawn Bush, Flight C winner was Diane Janusch. Congratulations to all!

Round 3 of the championship was followed by the OCCWGA Fall luncheon, and General Meeting at Redstone Grill. Highlights of the meeting included presentation of the proposed slate of officers for the 2013 OCCWGA board, approval of which will be requested at the Christmas luncheon and general meeting on December 11.

Becky Rubin updated members on the progress of the changeover in our handicap management system to GHIN, and announced that OCC will be conducting a hole-by-hole stroke allocation check to validate or current handicap strokes per hole.

These are the numbers found at the bottom of the scorecard beside the heading LADIES’ HCP, and they are used to determine the number of strokes you get, or give, in net score games and match play. The numbers are arrived at by an analysis of a large number of scorecards that have been collected over a period of time.

Finally, a correction to October’s note on 2012 Team Play. OCC was originally reported as being in third place for both net and gross scores, but it turned out that we were 2nd in net play. Even better!