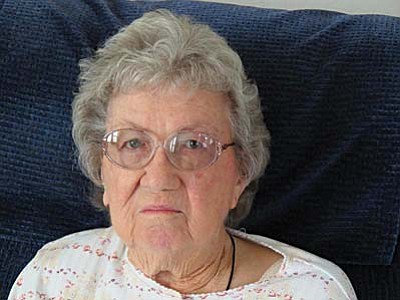 Rosie (Kovacovich) Lacey, 86, died Wednesday, Aug. 29, in Camp Verde.  Rosie was born June 10, 1926, on the family farm in Middle Verde, AZ.  Rosie spent most of her life in the Verde Valley.  Her husband, Van W Lacey, worked for APS so they had also lived in Casa Grande, Joseph City, and Farmington, N.M., when Van worked at power plants in those areas.

Rosie and Van enjoyed taking the grandkids during the summer months and getting them swimming lessons at the pool in Clarkdale.  She also loved to play cards ... mostly Pinoccle.  There were some 'spirited' card games at Ruth and Melvin Jensen's house for special occasions!

She was preceded in death by her husband, Van W Lacey, her parents Nick and Manda Kovacovich, and six of her siblings:  Mary Starkovich, Tony Kovacovich, Emil Kovacovich, Olga Calloway, Danica Ervin, and John Kovacovich.

A Memorial was held Sept. 4.  In lieu of flowers, the family is requesting donations be made in Rosie's name to Hospice Compassus - 70 Bell Rock Plaza Suite A - Sedona, AZ 86351.