The Company Town: The building of Clarkdale 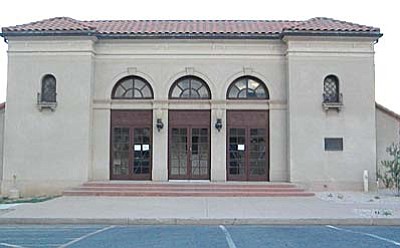 After William A. Clark’s death, company funds helped build the Clark Memorial Clubhouse, which opened in 1927. It is still used for a variety of town activities.

CLARKDALE -- Despite claims by Maryvale in Phoenix and McCormick Ranch in Scottsdale that they were Arizona's first master-planned communities, that distinction was claimed generations earlier by the Clarkdale Townsite, designed as a company town for William A. Clark's United Verde Copper Company smelting operation.

Most know of the riches extracted from Cleopatra Hill by Clark and rivals, but Don Ryden Architects dug into the development of Arizona's new town in creating a profile to document the old town for inclusion in the National Register of Historic Places.

In 1989 Clarkdale was placed on the National Register of Historic Places. It is rural Arizona's largest Historic District, comprised of 386 homes and buildings.

The Clemenceau community was also built as a company town for rival Jimmy Douglas' United Verde Extension Smelter, now part of Cottonwood, but the construction was never so durable among the company houses and the crumbling remains were swept away for new development last year, though many of the administrative and industrial buildings constructed for the smelter operation remain.

The first mining claims in the Jerome area were filed in 1876. The United Verde Copper Company was incorporated in 1883, but not by Clark. Clark was not the first name on the mining claims, but he was the first to make the claims a success, eventually buying out shares of the original United Verde stockholders.

The town was originally connected by a 60-mile road to the railroad at Ash Fork. Clark eventually established his own 26-mile narrow gauge railroad, which made transportation of ore and supplies convenient and profitable, and mules were no longer needed.

Clark moved his smelting out of Jerome to access a rich vein of copper beneath the former Jerome smelter and also to mine from an open pit. Avoiding the fires that raged below ground in mines was the key driver to open up the mine and move the smelter. Fires had burned for 10 years in the sulfide deposits.

The Copper Company or a subsidiary quietly bought up land along the Verde River owned by 11 property owners, eventually transferring 1,200 acres to the so-called Clarkdale Improvement Company. Clark also formed an independent utility company to handle water and electricity. Anticipating the rich development from the mine development and the new railroad link, Arizona Magazine in 1911 called the area the "garden spot of the state" and the "hub of the Universe!"

Clark is said to have intentionally built the smoke stacks to 400 feet "to belch out fumes 1,000 feet higher and not affect the orchards."

But that could not be done. The Upper Verde Farm and Orchard Company was operated by W.A. Jordan, one of the original landowners. The fumes eventually killed off vegetation, and Jordan moved his family to Sedona to plant new orchards. His subsequent development on the land eventually became "uptown" Sedona.

First built as a "company town," Clarkdale was founded by the United Verde Copper Company to provide a full complement of housing and services for the employees of their copper smelter. The extensive smelter complex was located near the Verde River and processed copper ore that was brought down from the mines in Jerome between 1913 and 1953.

Founded in 1912, Clarkdale is known as Arizona's first planned community claiming to be one of the most modern mining towns of its time.  Construction of Clarkdale took place over many years, beginning in 1914 and finishing in 1930. The phased construction led to various approved architectural styles including Bungalow, Craftsman, Mission, English Cottage, Eclectic, Tudor and Spanish Colonial Revival.

Clarkdale was designed and built from a unified master plan. The main town site was located on a ridge overlooking the industrial smelter complex and was developed with residential homes, including upper and lower-income housing, a commercial area, and administrative center, schools, recreational and cultural facilities, and parks.

Each of the four communities in Clarkdale, Upper Town, Lower Town, Patio Town and Rio Vista, was differentiated geographically, architecturally and socially.

Adjacent to Patio Town and south of the railroad tracks was Santa Fe Town where the railroad employees lived.

East of Lower Town was platted as Rio Vista, occupied by people who built their own homes on land rented from the Company.

In 1911, Clark moved the smelter away from his Jerome mines to a flat area along the Verde River in the valley below.

The Verde Valley Railroad was built by the Santa Fe with Clark financing and, by late 1913, Clark had arrived by rail in his own coach.

The original mechanical engineer actually polled future citizens to determine their interests in the design of the town. Initially, the houses were built on alternating lots and Clark was quoted as boasting the houses were 60 feet apart in 1914.

The town was to have water, electricity and sewer. A "redlight" district was not allowed and few liquor stores were permitted.

The townsite was first laid out in 1911 with ground broken in 1912, but early occupants used canvas tents until the first houses were constructed. A brickworks was also established on the river.

A transit company, the Jerome and Clarkdale Auto Company, was created to meet trains and deliver customers up the hill to Jerome. An early plan was to use the Verde Tunnel and Smelter Railroad, created to deliver copper ore from the United Verde Mines in Jerome to the Clarkdale smelter. Grades were too steep through the tunnel to operate a railbus and the idea was abandoned.

One of the first non-mining organizations to form was the Clarkdale Volunteer Fire Department.

The model community had a state-of-the-art mining operation. The new smelter was expected to triple the output from 1,000 to 3,000 tons of ore daily.

A thousand men worked the mines with another 250 employed for construction.

The brownstone commercial block of eight buildings was designed and constructed by the company between 1914 and 1915. The buildings originally housed a general store, bank cleaners, jewelers, pool hall and barber shop, a museum, drug store, theater, lodge hall and offices.

A multi-family apartment building, built as a dormitory, was built on 11th Street, north of Main.

A jail was also built on the Fiesta Street. Another industrial type building there was used as a pool hall and barbershop. A dance hall and swimming pool once stood in this location. The dance hall has since been demolished and the pool filled in.

In hailing the progress of development, the Jerome News in June 1914 dubbed Clarkdale "a City of Culture." It wrote, "Clarkdale seems a dandy lively place where people are friendly and full of co-operation."

The town provided social and recreational features including tennis courts and a bandstand. The tennis courts served as dance floors and a lodge hall was available above the theater. The town had a Little Theater group, a Business and Professional Women's Club, Knights of Pythias, Kiwanis and Masons.

There was plenty of sports activity. Baseball teams quickly took on teams from Jerome, and a ballpark was first built along the river and later moved to the west of 16th Street. The company at first paid for the teams, but when the rivalry got out of hand, that support was discontinued.

There was also golf, trap shooting and boxing with a prize fight ring built near the ball fields near the river.

The town expanded rapidly in 1919 after the war had bolstered the copper market. A Los Angeles architect was hired to design several key administrative buildings and a hospital.

By 1920, Lower Town had a legion hall and dance pavilion and a clubhouse was constructed at Peck's Lake.

The original elementary school house, built in 1913, was demolished to make way for a new structure built by 1923. A Phoenix architect was hired to design a new Clarkdale High School in 1928.

Construction slowed after the death of William A. Clark in 1925. He had left money in his will to build a library. With the addition of company funds, a Community Clubhouse and Memorial Library were opened in the fall of 1927.

Don Ryden says the fair rents and utility costs plus the number of recreational amenities helped Clarkdale residents weather the Depression in 1929.

But after the death of three male Clark stockholders in 1932, '33, '34 and the two surviving sisters Mary and Katherine sold the assets to Phelps Dodge.

No longer a family business, recreational facilities fell into decline under Phelps Dodge. The town continued to smelt copper through the Second World War, but by the time of the closure in 1953, only 125 people worked for the company.