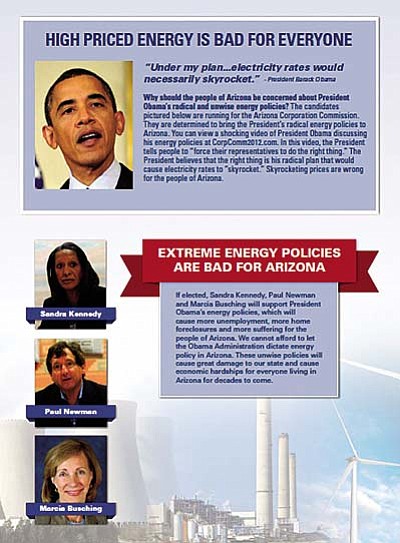 A page from the controversial Republican mailer.

PHOENIX -- The Arizona Democratic Party is accusing the three Republicans running for the state Corporation Commission of misusing the public money they are getting for their campaigns.

In a complaint to the Citizens Clean Elections Commission, Joaquin Rios, the party’s research director, said a pre-primary mailer sent out by the three GOP contenders -- incumbent Bob Stump and contenders Susan Bitter Smith and Bob Burns -- is designed to criticize the three Democrats seeking the same seats in November.

The problem with that, Rios said, is that candidates running for office with public funds -- in this case, all three Republicans -- are legally permitted to use the $91,874 they get for a primary election only to advance their own races against primary foes. Candidates get a separate allocation of $137,811 for the general election.

Rios said the publicly funded mailers went beyond those limits.

In one pre-primary mailer, the three Republicans say that if the Democrats are elected they will “support President Obama’s energy policies, which will cause more unemployment, more home foreclosures and more suffering for the people of Arizona.’’ And the mailer does more than criticize Democrats generically, naming the party’s three candidates: incumbents Sandra Kennedy and Paul Newman and newcomer Marcia Busching.

The panel is responsible for regulating the rates of investor-owned electric, gas, water and telephone companies. It also oversees the sale of certain securities and registers corporations.

Rios wants the commission to rule the mailings were illegal and sanction the three Republicans by withholding their general election funding.

Todd Lang, the commission’s executive director, said the checks already have been sent. But he said if the commission finds a violation it can seek reimbursement.

The three Republicans, in a joint response, did not deny criticizing the Democrats in a mailer paid for with public funds earmarked for the primary. But they defended the wording and claim a constitutional right to say what they did.

Free Speech by becoming participating candidates, that somehow the state can restrain us from articulating whatever message we think will best motivate voters to support us in the primary election,’’ they argued.

But Lang, while saying he has not reached any conclusion on the complaint, said that contention misses one key point.

“When you agree to participate in the Clean Elections program, you agree to abide by our rules, one of which is that primary funding must be directed to the primary and not to the general (election),’’ he said.

That restriction, said Lang, may restrict what candidates can say in campaign materials during the primary race.

“Any freedom of speech right you may claim to have, in my view, would be waived,’’ he said.

“You don’t have to participate in our system if you don’t like the restrictions,’’ Lang continued. “You’re free to run traditionally’’ using private dollars.

Burns, however, said Lang’s interpretation of the restrictions on primary campaign literature is too narrow.

“We get to say what we want to say as long as we say it during the primary,’’ he said.

The Republicans also said they needed to criticize the Democrats to “energize Republicans’’ to participate in the primary. They pointed out there were few statewide contests among GOP contenders.

Anyway, they noted that about a third of the brochures went to independents who are allowed to vote in either party’s primary.

“The objective of the mail pieces in question was to give the potential primary voter a message that was consistent with our positions and that would motive them to vote in the primary election and vote for us,’’ the response reads.

The GOP contenders, however, did not need to rack up votes: There are three seats up for grabs on the commission this year, meaning there was no chance of any of them not getting nominated.

It ultimately will be up to the full commission to review the complaint and decide if the Republicans violated the rules and, if so, what the penalty should be.