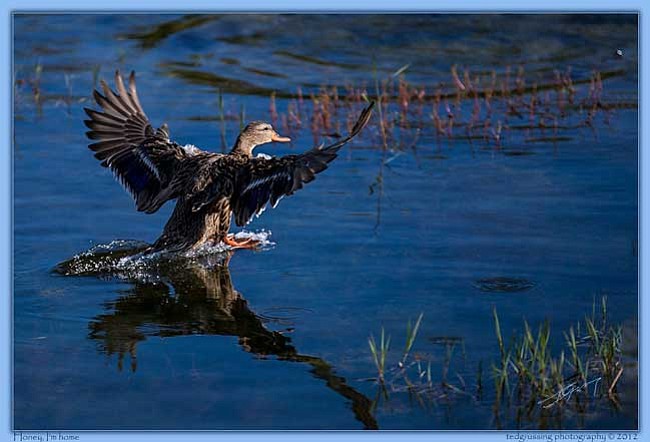 ... it almost appears that this hen mallard is reaching out to hug someone or as the caption states ... honey I'm home ... about a second later she is nearly stopped amidst a large spray of water. I got this shot about a tenth of a second after her feet touched the water.

It was one of those mixed days with some good and some not quite as good; what we thought was going to be an outpatient procedure for Corky turned into at least a one night stay at VVMC. I stopped at the ponds on the way home late afternoon and tried a few new tweaks on my settings for shooting waterfowl and they turned out to be good and now saved tweaks ... almost too good because I only can bring myself to toss five shots out of eighty nine. Home to pick up a few things for Cork and then back down to Cottonwood. Going to get a flight in this morning and do a shoot for the airport and then head back down and see Corky and hopefully bring her home ... cooking for one is not my thing.

Have a joyful day and spread smiles wherever you happen to be ... a very acceptable form of littering.