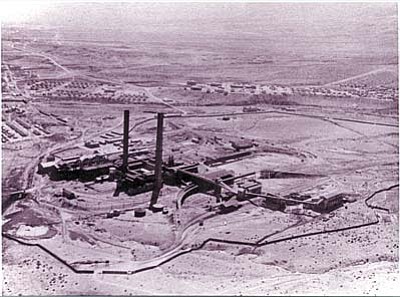 In 1919, the Jordans, along with 12 other farmers, filed suit against the United Verde Company for crop damage caused by sulfur smoke from the smelter. The suit was eventually successful (it went all the way up to the Federal Supreme Court), and they were paid for their losses in 1924.

The name “Jordan” is an integral part of Sedona’s history.

Brothers Walter and George Jordan, through their orchards and dry land farming technology, created the commercial operation that (along with the movie business) would allow the economy of Sedona to flourish.

He was 21 at the time. In 1886 Will began farming 80 acres on the Upper Verde (Clarkdale). In 1889 he met and married Annie Bristow. Their marriage produced nine children.

Annie T. Bristow, born in 1869, came to the Arizona Territory at the age of 6 after a four-month journey by covered wagon from Missouri to the Middle Verde area.

Her father, Parson James Caulson Bristow, was the first ordained Baptist minister to come to this area.

By 1911, Will began acquiring additional farm property, with the Bridgeport farm being purchased in 1912.

He had sold part of the Clarkdale farm to William Andrews Clark who then built a smelter to refine ore from the Jerome mine (see photo).

By 1919, the Jordans, along with 12 other farmers, filed suit against the United Verde Company for crop damage caused by sulfur smoke from the smelter. (So you see – pollution was not a problem unique to the late 20th century.)

The suit was eventually successful (it went all the way up to the Federal Supreme Court), and they were paid for their losses in 1924. In 1926 the settlement money was used to purchase the Sedona property.

Will and Annie never actually lived on the Sedona property, but stayed on the Sugar Loaf Ranch in Bridgeport, although Will, Walter and George farmed the property, producing quality fruits and vegetables.

Much of present Uptown Sedona is part of the original purchase of 175 acres.

In the 1920s, Will traded 12 of those acres on Oak Creek to Jess Purtyman for 65 acres of dry farm property -- the Sedona Heritage Museum now sits on part of those 65 acres.

This property was originally acquired by Frank Thompson in 1914, and then traded to Jess Purtyman who traded and sold the land to the Jordans (real estate transactions were both casual and complicated back then).

Walter was a farmer and orchardist, while George was an engineer and an orchardist, a rewarding blend of skills. The Jordan men successfully farmed those acres that today encompass Jordan Historical Park.

Another tidbit of trivia -- The town of Eloy (in Pinal County) is Syrian for “My God: Eloi.”