Corporation Commission GOP candidates give up $29,000 to settle accusations of misuse 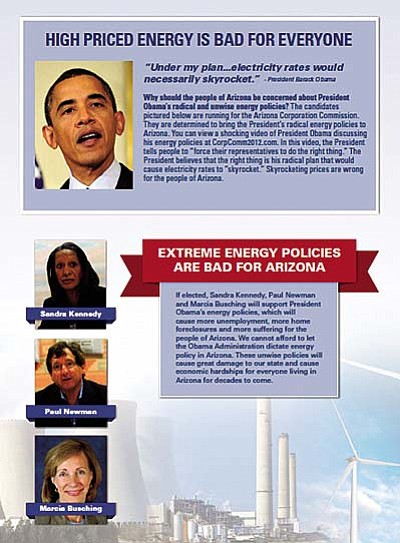 PHOENIX -- The three Republican candidates for Arizona Corporation Commission agreed Tuesday to surrender a total of nearly $29,000 in public funds to settle claims that they misused money given to them for their primary.

In a conciliation agreement with the Citizens Clean Elections Commission, Bob Burns, Susan Bitter Smith and Bob Stump did not admit they did anything wrong in criticizing their Democratic foes in a mailer sent out for a Republican primary. Instead, they said they were agreeing to a settlement to put the issue behind them.

But the three were under clear pressure to deal: Todd Lang, the agency’s executive director, had prepared a recommendation to the full commission that they vote there was reason to believe that state laws and regulations had been broken. That could have resulted in the candidates being fined on top of losing their money, as well as the charges dragging on and becoming a campaign issue.

The fight is over a pair of mailings by the Republicans prior to the Aug. 28 primary.

In one, the GOP contenders say if the Democrats are elected they will “support President Obama’s energy policies, which will cause more unemployment, more home foreclosures and more suffering for the people of Arizona.’’ The mailer also named the three Democrats: incumbents Sandra Kennedy and Paul Newman and newcomer Marcia Busching.

Lang, in his findings, said the problem with that is the Republicans were using some of the $91,874 in public funds each got for the GOP primary. And he said that, in accepting those dollars, they agreed to use the funds only for that race -- and not the upcoming general election where candidates get an extra $137,811.

“Each mailer unambiguously advocates against the election of opponents who were not on the ballot in the primary election,’’ Lang wrote. “The (candidates) were running unopposed for the Republican Corporation Commission nominations, not against the Democratic candidates featured in parts of the mailers.’’

The amount each agreed to surrender totals the approximate cost of sending mailers to voters who were not registered Republicans.

Because candidates running with public dollars cannot take outside cash, Tuesday’s deal means the three GOP contenders will have less available for the November general election.