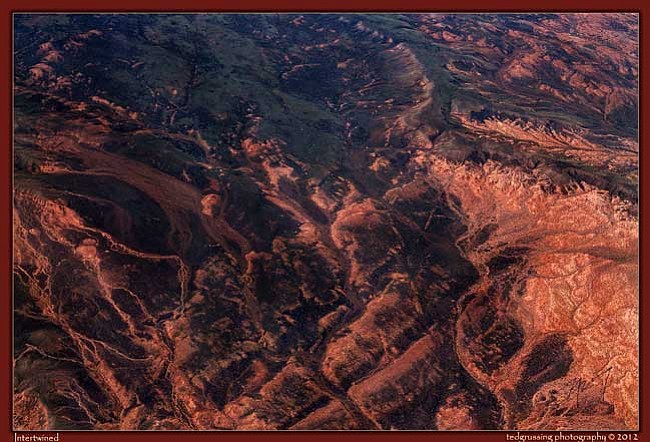 ... so the photo tonight is a full frame, no crop photo of earth's surface about ten miles south of the Little Colorado River and perhaps the same east of SR89 highway ... I think. I took this shot last week when Roger and I were covering a lot of territory over the plateau. We were on our way from Grand Falls and Roden Crater area to the Confluence of the Little Colorado River and the Colorado River. The formations are predominately the Moenkopi sandstone layer which is about seventy million years old. The recent monsoons had turned much of the greenery almost an iridescent hue and the erosion patterns are stunning. Not sure of the altitude when I took this but we had been gaining altitude continuously after we let Roden Crater so likely we were around nine to ten thousand feet MSL and on our way to around eleven thousand feet when we got to the Grand Canyon. This is the kind of shot that I can just sit and look at for a long time; it is the amazing art of nature who is in no hurry to finish the sculpting and painting ... the ever changing world of nature. Northern Arizona has more geologic history exposed on the surface than any other place on earth ... let your mind draw in the beauty of an ever changing planet. I wonder if we had been around five million years ago if we would have been trying to save the plateau from the horrendous erosion that carved the Grand Canyon?

Thursday is shaping up to be a good day and a very special day ... time for some rest before it is continued with four shots of espresso made from home roasted beans ... I could skip the rest and just go have some of that now :-)

Have a fun day and celebrate your continuing journey as you circumnavigate the sun and with the sun our galaxy the milky way ... only about twenty more trips around the galaxy for our star.