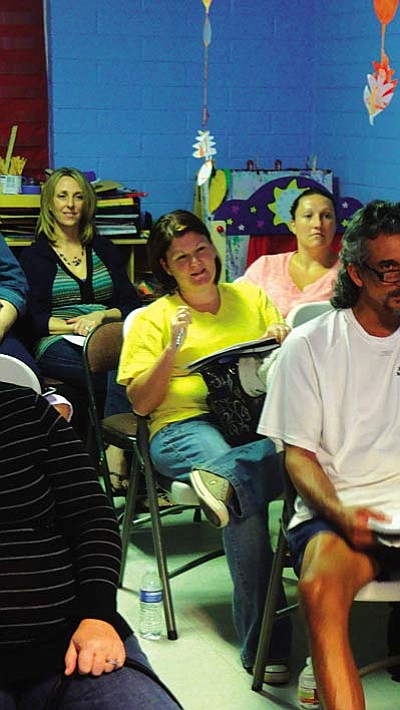 Pictured: Misty (center), and the Love and Logic Parenting Class in Cottonwood.

“Keep at it,” says Facilitator Sandi Cheney to the 23 parents attending her parent class at Bright Future’s Child Care Center in Cottonwood. This class is entitled Love and Logic- and the name says it all. Through the class, parents learn strategies to reduce the stress of the whole family by parenting with love and with good, common sense.

This is the second time that Misty Campbell, mother of four and foster mother of two, has taken Love and Logic. Misty found this class to be so useful that she decided she wanted to get trained to teach the curriculum herself.

Misty and her husband Brian, a sergeant in the Cottonwood Police Department and a former Marine, began taking these classes to help them with their daughter, Triniti.

It wasn’t that Triniti was an unruly child- it was just the opposite. When Triniti, now ten, was younger Misty and Brian realized that they rarely allowed her to make choices for herself. This, Misty says, was not helping Triniti become the independent thinker that they wanted her to be. “Children need to build their sense of self so they aren’t just followers later in life,” says Misty.

Love and Logic teaches parents to present their children with simple choices. As children get older, the choices can become more complex. Presenting a child with a choice-even a simple one like whether to have toast or cereal- empowers the child to think for herself and learn consequences. This prepares children to make decisions in the real world, something that adults must do every day.

Facilitator Sandi Cheney urges parents to begin teaching choice-making in early childhood. “The biggest window of development happens when they’re little,” says Cheney, “Birth to age five is ‘prime time’ for a child, and you are the prime person that can teach them.” Since 90% of a child’s brain connections are formed before age five, the experiences children have in the early years lay the foundation for a lifetime.

Taking this advice, Misty and Brian apply the skills they learned to all of their children: their 17-year old adopted daughter, agreeable 10-year old daughter, five-year-old daughter diagnosed with Asperger’s, feisty three-year old son, and the foster children they welcome into their home . Love and Logic has helped them guide their children to have a solid sense of self and a strong sense of empathy, while setting clear expectations for a more harmonious household. Within just a month, it helped them change their fussy three-year-old son Bryson into an eager helper, a skill that will serve him for the rest of his life.

The class does not promise that parents will suddenly have perfect children. “Kids are human too,” says Misty. Instead, parents use the tools they learn in the ways that works best for their family.

Parents are a child’s first and most important teachers. By taking advantage of the free parenting classes available to them, like Love and Logic, parents like Misty and Brian are devoted to the success of all of their children- whatever they choose to be.

First Things First funds free parenting class like Love and Logic throughout Yavapai County. To find a class near you, go to parentsaz.org.