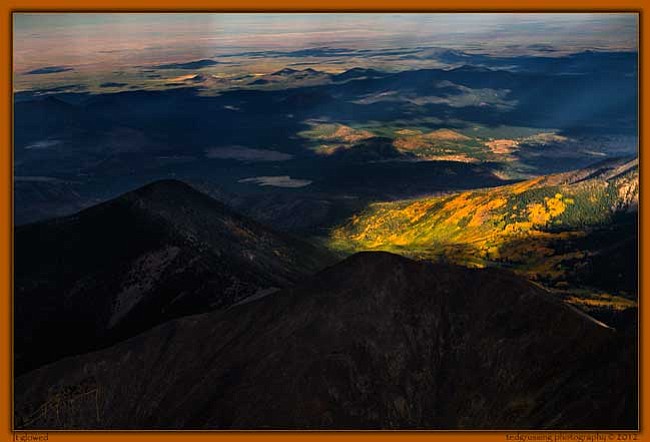 ... I spent most of the afternoon in the air and the sky was beautiful. After shooting the switchbacks on 89A at the top of Oak Creek Canyon I headed over to Sycamore Canyon to get some more shots of the rock formations that look like ancient castles. From there it was a no brainer that I was heading up to the peaks and beyond. The cloud base was something over fifteen thousand feet, pretty solid around the peaks, but light shafts were breaking through ... there and all around the area ... and the aspen appeared to be in pretty full color ... more than an hour was spent circling around the peaks and shooting it from all sides and direction mostly over fourteen thousand feet. This shot is one of my favorites with Humphreys Peak in shadow, shafts of light blasting through the clouds and water vapor and illuminating stands of aspen in the caldera of the peaks. It was fun and no two shots are the same ... I also got a lot of shots of Kendrick Peak and other volcanic cones in the area. It was getting a little late, temps were well below freezing and I was flying through freezing rain that started building ice up on the wings so a quick loss of about a mile in altitude to warmer air and shed the ice on the wings. Then it was time to turn the engine off and soar the last twenty four miles back to Sedona and land. It was as fine a day as I can remember spending in the air ... after landing and exiting the runway I had to turn the engine on for a minute or two to get back to the shade/tie down.

It is into the weekend and hope that all is well with you and yours. Have some fun, be safe, be a blessing and I'll be back Monday morning.