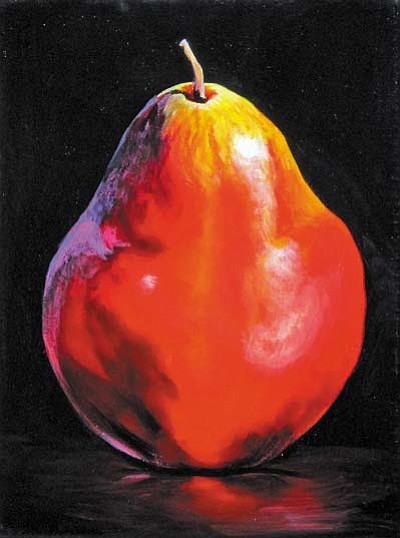 “Untitled #635” by Anna Pales is a 16”h x 12”w mixed media on canvas painting that will be featured in the new exhibition “Anna Pales: Tranquility” opening during “1st Friday” at Sedona’s Lanning Gallery.

Pales has had numerous group and individual shows nationwide. Her work has been exhibited in museums and her innovative paintings have been recognized not only throughout the United States but in Great Britain, France, Australia, New Zealand, and Ireland.

At times, she paints with powdered gold-leaf to further heighten the impact of her images. The result is elegant and utterly unique: The trees that are immortalized by Pales in her landscapes capture a reality of the land and of the mind; the single pieces of fruit portrayed in her still lifes appear beyond real. Pales's images always provoke thought in viewers.

From an early age, Pales found it fascinating that man has always surrounded himself with art.

"I soon discovered that art became a way to express myself," she recalls. Her artistic career began impressively with a full scholarship to the Art Institute of Chicago, which she attended while simultaneously attending the University of Chicago. Initially, her outlets were sculptures and oil paintings but, as her experience grew so did her ability to define her artistic expression through the development of her current singular approach to the mediums she uses. "I am a painter," Pales asserts; "I believe art is the most forceful and clear way to communicate."

Today, Pales can be found in her studio painting at most any hour of the day or night. Generally, she works on one piece at a time, taking from a week to two months to complete each. Her artistic goal, always, is to "portray nature's endless beauty through its simplicity, whether expressed through a single piece of fruit or a rolling landscape."

Stop by the gallery and meet Anna Pales on opening night. Exhibition through April 14.