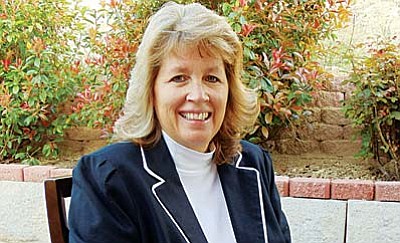 VERDE VALLEY - This year's winners of the Yavapai College President's Outstanding Alumni Awards have been announced. For the Verde Valley, the winner is Pam Miller, CEO and Publisher of Verde Valley Newspapers, Inc.

The 2013 recipient for Prescott is Judge Kenton D. Jones.

Miller is in charge of the day-to-day operation of the Verde Independent in Cottonwood, the Camp Verde Bugle in Camp Verde, and Kudos, the arts and entertainment weekly for Sedona and the Verde Valley. In addition, Miller is responsible for the Villager, a monthly community newspaper in the Village of Oak Creek, as well as online sources verdenews.com, cvbugle.com and kudoaz.com.

Miller was not expecting the award.

No one else was stunned, or even surprised.

But some others are more than happy to toot her horn for her.

"Pam applies a steady hand as she directs the business," Soldwedel said. "She is an executive I trust and admire when it comes to making sound and ethical decisions."

Blake DeWitt, senior vice president of WNI, says Miller is "an exceptional leader who continually rises to challenges and addresses them with successful outcomes."

DeWitt said Miller has a wealth of experience in the publishing business and is very generous in sharing her knowledge and mentoring co-workers and subordinates.

Miller explained that in high school her original intention was to become a teacher. But she got involved during her senior year with the newspaper at Prescott High School. She says she was encouraged by a teacher named Jeff Stone. She also developed some friendships by working on the newspaper.

"I had a sense of belonging among my fellow newspaper kids," she said.

At Yavapai College, Miller was mentored by a journalism professor she remembers fondly as "Mr. Mike."

She became editor of the Yavapai College newspaper, The Roughrider. She also edited a bi-annual college magazine.

"I'm really thankful for Yavapai College because I was a kid that couldn't afford to go off to a major university to get the foundation for my bachelor's degree," Miller said. "To this day, I think back fondly on my experiences. It allowed for my transition."

After Yavapai College, Miller went to Northern Arizona University and earned her bachelor's in journalism in 1983. Her degree had an emphasis in marketing.

After college, Miller went to work for the Daily Courier in Prescott as a sales representative. It has been the only company she has worked for.

She was promoted to publisher and CEO of Verde Valley Newspapers in 2004. The Daily Courier and VVN are both owned by Western News&Info, Inc.

That service includes: 2011 chairman of the Cottonwood Chamber of Commerce. She served as a board member of that organization from 2006 to 2012.

Since 2009, she has been chairman of the Verde River Days committee. Miller also has served as board member for the Verde Valley Guidance Clinic, Yavapai Big Brothers & Big Sisters, Yavapai Silent Witness and Buena Vista Children's Services.

Miller also served as a member of the Rotary Club of the Verde Valley, and she is the driving force behind the Chamber of Commerce's annual Verde Pride Awards.

Lana Tolleson, President and CEO of the Cottonwood Chamber of Commerce, credits Miller with playing an important role in helping the chamber through a tough economy.

"Under Pam's leadership the chamber was able to weather the rough economic downturn that affected many businesses and non-profit organizations," Tolleson said. "Through Pam's guidance and forward thinking, the chamber now has increased membership, a stronger presence in the community and a reserve account for unexpected expenses."

Miller said she is very proud of the work done by the great teams she has worked with through the Chamber of Commerce.

"I've worked with a lot of great teams over the years," she said. "The best team being my employer."

"While Miller says she has found the changes she has witnessed over the past 30 years in the newspaper business to be both exciting and incredible," said Linda Buchanan of the Yavapai College Foundation, "friends and family know that Pam's most cherished and important role is that of wife and mother. She is married to Leonard Miller, and she has twin 16-year-old boys and a 14-year-old daughter."

Buchanan added, "Yavapai College could do no better than to recognize this former student and distinguished professional woman, Pam Miller, as our 2013 Alumni of the Year."