A Heart for Brad 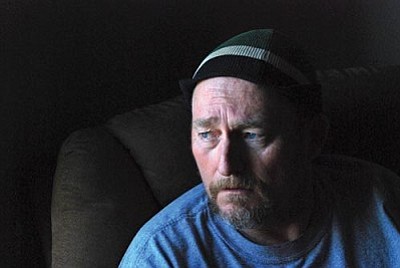 Brad Figy of Cottonwood, whose heart operates at 20 percent capacity, has less than a 50 percent chance of living two more years without a heart transplant. VVN/Bill Helm

COTTONWOOD - Brad Figy of Cottonwood needs a new heart. And he cannot afford to do anything about it.

Figy checked himself into the hospital on Feb. 16 with flu-like symptoms and fluid build-up in his chest. On Feb. 21, after a series of medical tests, doctors told Figy that his heart is operating at 20 percent capacity and that he has a 50 percent chance of living two years without a heart transplant.

"Brad's breathing got worse and worse, says Angela Figy, Brad's wife. "His legs had swollen to twice their [normal] size. Doctors said if we hadn't taken Brad to the hospital, he would have died right here [at home]."

Brad says he feels "better now than before I went into the hospital. But I have good days, and I have bad days."

"One day last week, I felt bullet-proof. The next morning, I could hardly breathe."

It is bad enough to need such a surgery. But Figy and his family own a small business, and they do not have medical insurance. "Unless you have nothing, you don't qualify for AHCCCS [Arizona Health Care Cost Containment System], says Angela. Without insurance, Brad does not qualify for a heart transplant until he has raised at least $90,000 towards the cost of surgery.

Brianna, Brad and Angela's youngest daughter, has taken on the role of fund-raising manager for the family. Brianna, 23, says she has raised about $6,500 in the nearly two months since Brad's diagnosis. Brianna has been selling wristbands that say "Heart for Brad' and is currently making a design for "Heart for Brad' T-shirts.

But as busy as she has been with fund-raising, Brianna says she still struggles with her father's illness.

"I'm a really logical person," Brianna says. "I can generally see the details to know how to resolve things. But with this, I was overwhelmed."

It is the Figy family's faith in God and the support of their family and friends that has helped them get through this most difficult time.

"That's the only thing that is getting us through," Brad says. "My faith in God is sustaining me each day. I have to believe that God is who he says he is and that he does what he says he does.

"But my main worry is not being able to provide for my family."

One of their friends, Alicia Slaughter, owner of Bargain Mart in Camp Verde, has placed a donation jar near her cash register with the phrase "Heart 4 Brad' and a plea for help for her friends.

"They are an awesome family," Slaughter says of the Figy family. Slaughter has had the jar on display for a month and says she has already received $50 in donations.

And Angela says another friend recently donated the proceeds of a garage sale, approximately $800.

"The community here has been amazing," Angela says. "The church, our friends, they have all been wonderful. It's just amazing to have a community like this."

"I've been going to the hospital three times a week," Brad says. "They've taught about the disease, how I can live with it and the lifestyle changes I need to make. I can exercise to build up my heart for the transplant surgery.

"The care of Verde Valley Medical Center has been wonderful. The cardiac unit is top-notch. But I'm still in denial over the whole thing."

As much as she may want to try, Angela cannot deny the family's economic struggles since Brad's diagnosis.

"Suddenly, our savings is gone," Angela says. "The hospital bills are tremendous. Your lifestyle completely changes. You do what you have to do to survive. But the main thing is to get Brad on the heart-transplant list."

Donations can be made through http://www.giveforward.com/heart4brad. Donations can also be made by mailing a check to: C/O Hope Smith, Chase Bank, Cottonwood, Ariz. Branch, 1540 E State Route 89A, Cottonwood, AZ 86322. Checks payable to: Bradley S. Figy account.

"Suddenly, our savings is gone. The hospital bills are tremendous. Your lifestyle completely changes."