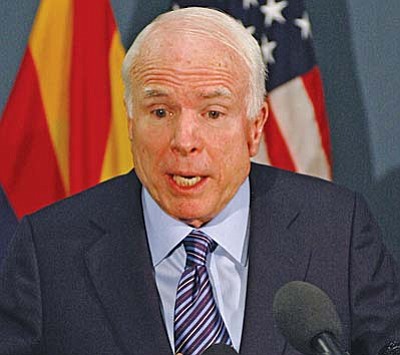 PHOENIX -- The state's senior U.S. senator said Thursday that eventual approval of a comprehensive immigration plan with Republican votes will enable the GOP to once again compete for Latino votes in Arizona.

John McCain said it would not be "helpful' if the bipartisan proposal by the "Gang of Eight' is sidelined because Republicans who control the House -- and have enough votes in the Senate to filibuster -- refuse to go along.

"I think it's very obvious, as we know, the Republican Party has less support from the Hispanic community in the recent elections,' he said in a joint telephonic press conference with fellow Arizona senator and co-sponsor Jeff Flake. That clearly played out in the presidential race when 71 percent of Latinos voted for Barack Obama.

But McCain said that does not mean strong Republican backing for the plan will suddenly make the GOP attractive to Hispanics.

"If we pass this bill, I don't think we gain a single Hispanic vote immediately,' he said. The senator said, though, that does not mean there will be no political payoff -- eventually.

"What it does is it puts us on a level playing field to compete for those votes,' McCain said.

Those votes could make a difference.

Nationally, the Pew Hispanic Center predicts that Latinos will account for 40 percent of the growth among eligible voters in the United States between now and 2030. That compares with a 23 percent growth rate for non-Hispanic Anglos.

And estimates are that Hispanics already make up 25 percent of the voting-age population in Arizona, though turnout among the community has not kept pace. In any event, Hispanics are likely to play an ever-increasing role in who gets elected in Arizona.

That still leaves the question of the political fallout if the plan falters and Republicans are blamed.

"I don't know, frankly, what happens if it fails because I'm not planning on it failing,' McCain said. "But I know that if it succeeds, the scenario that I just described to you prevails.'

Flake acknowledged the link between the issue and voter reaction.

"I generally think that good policy makes for good politics, and it's no different with immigration,' he said. He did not address the question of whether a Republican-orchestrated defeat of the measure will undermine GOP chances in the future, saying only that both the policy and political arguments behind the measure are strong.

Separately, McCain said he believes if Congress adopts the measure it likely eliminates the need for Arizona and other states to adopt laws similar to SB 1070.

That measure, approved in 2010, was aimed at allowing state and local police to detain and arrest those not in this country legally. Proponents said the state had to step in because of the failure of the federal government to secure the border.

McCain said one key element of this plan is $3 billion for border security, including new fencing, more Border Patrol agents and new technology developed in Afghanistan and Iraq to detect people crossing illegally. He said the legislation anticipates surveillance of 100 percent of the border with 90 percent "effective operational control.'

That issue of border security is critical to get the support of Gov. Jan Brewer who signed SB 1070.

"We've been here before,' she told Capitol Media Services in January, citing the 1986 deal passed during the Reagan administration when about 3 million gained U.S. citizenship.

"The border was never secured,' Brewer said at the time, saying now she wants that done first. And only at that point, the governor said, should Congress address the broader issues of immigration, including the status of the estimated 11 million people in the country illegally.

McCain said that approach is not going to fly politically. But he acknowledged the concerns, citing that 1986 measure.

"It's important to assure the people of Arizona that we will not have a third wave,' he said. Flake agreed.

"For those in Arizona who have borne the brunt of the federal government's failure to secure the border for so long, this is a welcome change,' he said.

The main section of SB 1070 that remains in effect requires police who have already stopped a vehicle to inquire into the immigration status of occupants when there is a reason to believe they are not in this country legally.

In a ruling last year, the U.S. Supreme Court rebuffed attempts by the Obama administration to have that provision declared preempted by federal law. But the justices said they would consider revisiting the law if there is evidence it is being enforced in a discriminatory manner.

The justices, however, voided three other provisions. And two other sections remain on hold while they are being reviewed by the 9th U.S. Circuit Court of Appeals.