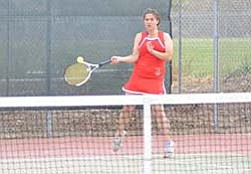 Despite not making it past the first day of the state tournament, three Mingus Union girls' tennis players gained insight and knowledge on what the best players in the state are doing to be successful.

"[I learned to have] the skills and the mindset you need to win state," said junior Bethany Hickey. "You can't just go in there, just free of mind, just willy-nilly and go far. You have to really dedicate yourself and put your mind to it and trust in your strokes."

The day began for the Marauders doubles team of Courtnee Weaver and Lauren Nevitt. Courtnee and Lauren had only been partners for a couple of matches this season, but were used to playing doubles with each other from the previous season, so there was not much of a learning curve when it came to getting acquainted with their new partner and the rapport was there from the previous season.

"It was great. It was really fun and kind of difficult, but we did good," Courtnee said.

In their first match, the duo was dropped I straight sets to Coolidge's Micaila Bojorquez and Themis Shilo 6-4, 6-3. Despite the score, head coach Andrea Meyer was happy with what she saw from the girls.

"They had some games and some times during that match when they were close and they played well at the net, but the other team dominated at the net and that's really the name of the game at doubles," Meyer said. "They had a fairly tall girl, who came out of the alley and poached, regularly, and that's what gave us trouble."

Having been to state to participate in the double portion of the tournament the two previous years, Bethany was prepared for her singles draw.

"It [the state doubles tournament] prepared me to get a feel for what state was and what state was about and just get the experience," Bethany said. "This year I went singles and it was more competitive because its just you and you don't have to worry about someone else playing with you, but I had fun."

Meyer echoed Bethany's thoughts on singles play, and noted how it was difficult for all of the players in the first round, because they were going into their match with little, if any, knowledge of their opponent.

"She, in matters of personality, is more of a singles player than a doubles player and she's well suited for that. She just tried to stay relaxed," Meyer said. "None of the players knew who their opponents were going to be first round, so it was really a matter of trying to assess what their opponent's strengths and weaknesses were during the warm-up. I was pleased."

The singles matches got underway shortly after the doubles and it was time for Bethany to step onto the court. The junior was matched against Vahida Karac from Cortez High School. Unfortunately, the Mingus junior was swept 6-3, 6-0, marking an end to Bethany's junior career.

"I think I played well. Cortez played really well too. I believe that we were evenly matched, but she had some great shots on me, which led her to win."

Despite the season being over, the girls stated how one of the best things about the season was getting to know each other and growing as a team.

"Bonding with the team. I love this team," Bethany said. "Everyone has their own unique characteristic, the way they play tennis, its just fun getting to know them."

And Lauren echoed her sentiments.

"It was a prolonged thing, just getting closer with all my teammates. That was my favorite thing, we really grew as a team."

One of Courtnee's favorite memories was a little mishap she had on the court, during a match.

"At one of my matches, I went after the ball and fell. That one of my best memories [of the season]."

Meyer's favorite part of the season was when she took her team to the Northern Arizona Championships and saw the progress the girls had made.

"The highlight of the season really was that northern Arizona tournament. The girls played such gritty tennis," Meyer said. "Some of my JV girls nearly beat some lower ranking varsity girls form other teams and they were incredulous with the scores that they had. They just ran that court and they kept their eye on the ball. All of the eye tracking drills that we had done paid off. They played just excellent tennis, every girl."

Tennis season might not start again until next February, but that doesn't mean the boys or girls will be taking time off. Members of both teams will participate in United States Tennis Association club that will be coached by Mingus coaches and give the students an opportunity to get on level ground with the teams that play year round.