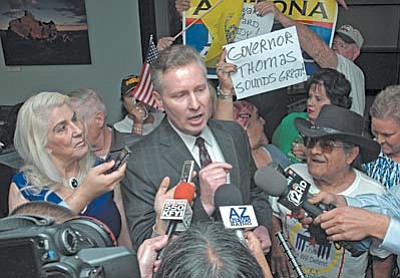 Andrew Thomas said in announcing his candidacy for the 2014 race it proves he is willing to take on the powerful.

PHOENIX -- The newest Republican candidate for governor said Friday he does not believe his disbarment for misusing his former office is a political impediment to his election.

In fact, Andrew Thomas said in announcing his candidacy for the 2014 race it proves he is willing to take on the powerful and that he was doing his job.

"In Mexico, prosecutors who take on the powerful are shot or blown up,' said Thomas, the former Maricopa County attorney, after filing the necessary legal papers.

"In Arizona, they are disbarred,' Thomas continued. "And that has to change. And I believe voters will agree with me.'

Thomas contends his experience as Maricopa County's top prosecutor will help him stand out in what is shaping up to be a crowded GOP gubernatorial primary. And with two contenders officially in the race, two with exploratory committees and two other elected officials eyeing the office, that could mean victory for any candidate who can land 20 percent of those who turn out to vote.

As Maricopa County attorney he was a key supporter of a successful ballot measure to deny bail to illegal immigrants arrested on serious charges.

He also took the unprecedented step of using Arizona laws against smuggling of individuals to actually charge those being smuggled into the country with conspiracy. While the sponsors of the legislation said that was not their intent, courts have upheld the move as legal.

But he ran into problems when he began to bring charges against county officials and judges, alleging improper conduct in the construction of a new courthouse tower in downtown Phoenix. That resulted in complaints to the State Bar of Arizona, an investigation and ultimately a ruling by a three-person disciplinary commission of the Supreme Court concluding he had ``outrageously exploited power, flagrantly fostered fear and disgracefully misused the law.'

Two of his lieutenants who also faced discipline chose to appeal to the state's high court.

Thomas, however, did not and his disbarment became final. But he said Friday he saw no reason to pursue that route.

``The judges of the Supreme Court know the judges that I prosecuted,' he said. ``They vacation together in San Diego with the Bar officials that I sued.'

Incumbent Jan Brewer has said she, too, could be a candidate despite the constitutional two-term limit, insisting the first two years of her service simply filled out the term of Janet Napolitano who had quit.