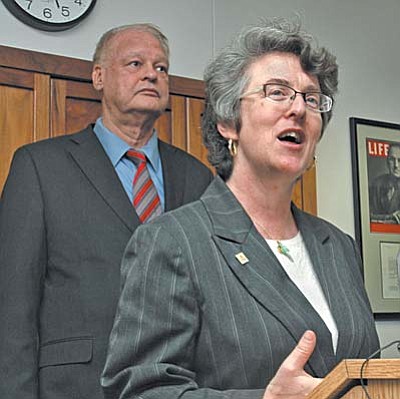 Jennifer Pizer, an attorney with Lambda Legal, and Attorney General Tom Horne detail the agreement Monday they reached an agreement over what cities can -- and cannot -- approve in ordinances granting rights to domestic partners. (Capitol Media Services photo by Howard Fischer)

Horne said there's nothing wrong with cities requiring hospitals to let partners visit or even those in registered unions getting family rates at the local swimming pool.

But he objected to a provision in a new Bisbee ordinance which mentioned seven specific rights, like community property and inheritance. Horne said that made it seem like those who register as partners get those rights despite specific state statutes reserving them to married couples.

Following a closed-door meeting Monday with attorneys representing Bisbee and other cities, Horne acknowledged domestic partners do, in fact, have those rights. In fact, so does every other couple in Arizona, whether registered in a civil union or not.

But the key is those rights are not automatic to domestic partners. Instead, they require some affirmative action, like taking title to a property as joint tenants or executing a will.

Horne said even if Bisbee's ordinance does not purport to grant new rights -- a contention disputed by city officials -- he feared those reading it or any other local law modeled after it would think they don't need such document if they are in a registered domestic partnership.

"If there were no civil union, they might realize they need to write a will,' he said. "And so we were fearful that people would be misled into not taking those precautions that they normally should take with wills or contracts or other relationships among people that are recognized under Arizona law.'

But Pizer, who agreed to represent Bisbee in any legal challenge, said Horne came after the city with the attitude that communities should not mention those other rights. That, she said, is not acceptable.

"I think it's very helpful as a practical matter when a city recites a range of things that couples can do and is specific about what the city is doing,' Pizer said. "This gives guidance to couples.'

Pizer said, though, the victory is bigger than just that Bisbee gets to have its ordinance, though it needs to be rewritten. She said just having cities list rights is a public relations victory -- and perhaps a step down the road toward eventual statewide recognition of couples.

"An important part of reducing discrimination against anyone, but specifically diverse families, is having government show a recognition of the commitment, the financial obligations couples take on, the fact that couples are having children,' she said.

"The range of things that are called out by this ordinance show that the city sees these families functioning as other families, despite the lack of recognition in state law,' Pizer continued. "As attitudes change, as respect is afforded, then we get closer to the time when we can actually change the law to reflect that respect and provide all the protections.'

The compromise that came out of the closed-door meeting is that Horne will not challenge local laws that mention things like property and inheritance.

"They can list what contracts people can enter into and what they can provide for in their wills, and other things that they're entitled to do under current law,' he said.

"And then they can say, if you enter into these contracts, which you have a right to do now, we will recognize that and we will make a record of it, we will formalize it, we will celebrate it, whatever they want to do,' Horne continued. In fact, he said cities are free to actually make copies of these various draft contracts and wills available to those who register -- as long as city officials do not start giving legal advice.

That stance appeared to satisfy Pizer