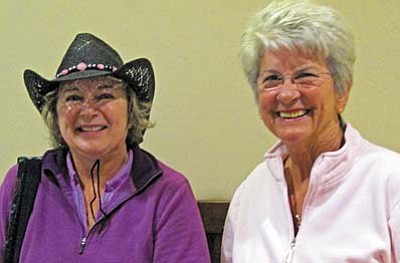 The Oakcreek Women's Golf Association golf season went into high gear in April with the launching of the Interclub series on April 2 at Prescott Lakes.

The format for changed this year to team competition, with each team including players from four different clubs. Individuals no longer compete against players from their own club, and the hosting club no longer has the advantage.

The format is two net best balls of the foursome, with prize money being paid to approximately one third of the field. Teams are balanced by handicap and all four members of the winning teams are winners!

With this friendlier format, we hope for greater participation, and the first play day was a great success. OCC had two winners, our president, Marion Maby, and our Interclub rep, Carol Meiner. These women set a fine example of supporting the Interclub series, and we should follow their lead.

This is so important to keeping Interclub going every year, and we should make an effort to play in these events! It’s a lot of fun and a good deal, with your fee going to your golf, cart, and a great lunch, as well as prizes. Watch your email inbox for details of the next one at Quailwood on May 21.

April also saw the wind-up of the Ringers Tournament, with participants throwing in $5 to watch their hole-by-hole scores improve over four field days. Many clubs do ringers over an entire season, but OCCWGA concentrates on a short period of time.

An interesting take on it, having the effect of forcing players to really focus on improvement, and a wonderful exercise for anyone who wants to bring that handicap down. The prize money was divided among 10 winners over three flights, gross and net scores, including ties.

The major tournament in April was the President’s Cup, an individual net score format over two play days.

Special congratulations to winner Judi Forrest, a snowbird who got a leg up by being the only player who broke net par on Day 1, in weather unusually cold for the season. Let’s hear it for the Northern girls!