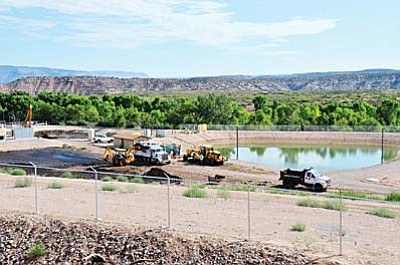 The old plant’s aeration lagoon held Class B effluent and is being converted to a Class A effluent holding pond. VVN/Jon Pelletier

Clarkdale's new wastewater treatment plant is in the final phase before being able to produce A+ effluent, said Utilities Director Wayne Debrosky.

The old plant's aeration lagoon held Class B effluent and is being converted to a Class A effluent holding pond, a process that is being slowed down slightly by moisture from monsoon season.

The facility dedication is tentatively set for mid-September, after construction is cleared and the site receives a final grading. Workers will also make sure the lining is watertight.

"It's a labor-intensive process," he said. "From the old treatment process, there was wastewater sludge that was in that aerated lagoon. We have to clean that out before we can put it online."

The new plant will produce 100,000 more gallons per day than the current facility. Once the higher-quality effluent reaches the holding pond, it can be used for construction and irrigation.

"We hope to at some point in the future be able to recharge aquifers with it," Debrosky said.

About $500,000 in funding remains from a Water Infrastructure Finance Agency loan. If the project is completed under $5.5 million, the five-year loan repayment period will decrease.

Debrosky said the final cost of the plant will determine rates, but each customer will likely pay about $5 more per month for service.

"Since we increased the size of the wastewater plant, we can connect more people," he said. "As more people connect, it changes how much we have to raise the rate."