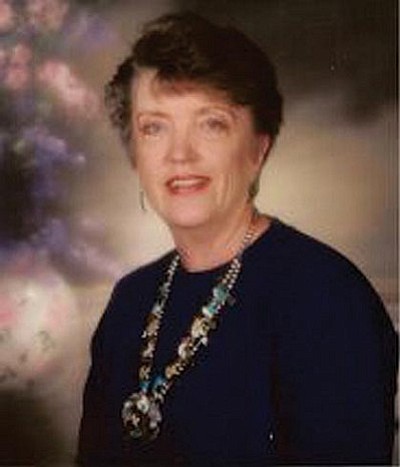 Cause of death was emphysema. She was 82.

Peggy's early career was spent teaching in Arizona and California. In 1960 she moved to Jerome with her two children to accept a teaching position at the Sedona Brewer Road Elementary School.

It was while teaching here that, in 1968, she was awarded a Fulbright Foreign Exchange Scholarship and spent a year teaching primary students in Haslingden, England.

Returning to Jerome, she was elected president of the Jerome Historical Society, the first woman to serve in that post, and chapter and state president of Alpha Delta Kappa, the professional teachers' association. She retired from education in 1993.

Other than reading books - for which she had a life-long affinity - Peggy was a prolific traveler, extensively exploring Europe beginning in 1966 and visiting 5 of the 7 Continents.

Upon her retirement from teaching, she moved from Jerome to Tucson and became a docent at the Arizona Sonora Desert Museum. She also was active in the American Association of University Women and the Arizona Historical Museum.

Monies will be used to purchase a bench for museum.