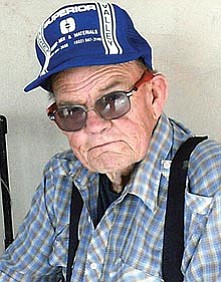 He was born on September 11, 1936, in Clemenceau, AZ, to Oscar Burrell Russell and Virginia Marguarette Purtymun. He grew up in the Verde Valley with his two siblings. He went to work for Arizona Game & Fish in 1953 and was there for 16 years. He joined the Arizona Department of Transportation in 1971 and worked 16 years until he eventually retired. After retirement he spent a lot of time watching sports and raising his grandchildren. He was an amazing grandpa that was adored by his grandchildren and great-grandchildren. Wendy took pride in watering his trees and honeysuckle. He liked when summer rolled around so he could plant his container garden.