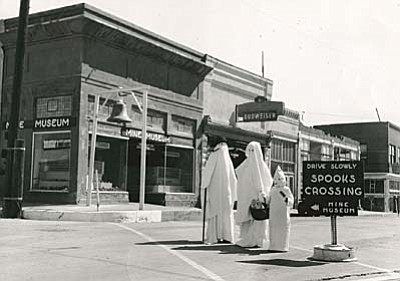 From elevators to hamburgers, Jerome's haunted reputation is 60 years old and still thriving.

"In 1953, the Jerome Historical Society formed because essentially, the town was closing up," Muma said. "The mines had closed their doors, there was no economy here because everything centered around the mines and the operations."

There were no jobs and no reason for people to make the winding drive up to the hilltop town.

"What they relied on for their economy and their well-being in this town was gone," Muma said. "Who wants to drive up that road to come up here to buy groceries? They had to come up with some reason to bring these people here."

After the town's economy collapsed, the 10,000 to 15,000 peak in residents dwindled to about a hundred. These few remaining townspeople started the marketing campaign that would turn Jerome into a tourist destination.

One of the first promotions was a photo taken in front of the Connor Hotel of two kids and an adult draped in classic Halloween ghost costumes: Sheets with holes cut out.

They posted signs at the top and bottom of the hill with population numbers crossed out and "Ghost City" written at the bottom.

"We stopped putting those signs up because they were stolen so much," Muma said.

Hippies starting coming through Jerome in the '60s on their way to California. They found abandoned homes and buildings, clothes still littering the hallways, that owners were willing to rent out cheaply.

The new residents brought their love of art, poetry, paintings and pottery, Muma said. The ghost culture blended with this new boutique gallery atmosphere, but there were still slow traffic days by the time Muma moved to Jerome 14 years ago.

"But now, we seldom have a slow day up here," he said.

Tourists come from all over Arizona and abroad, mostly for the history.

"It's still what drives the majority of people to come here," Muma said. "The wineries play a part, and the art galleries play a part and the shops. They come up here to see this eclectic town up on the side of this hill that was once a billion-dollar copper camp."

There are a few families still around from when the town found its new niche in the tourism market.

"They'll tell you the same thing," Muma said. "People thought Jerome was going to disappear like many towns did of that era that were related to mining."

Business owners use the legends and stories to their advantage, including two companies that offer haunted tours.

For the nighttime tours, Ferguson offers EMF readers. His office near the Post Office has one wall lined with photos of what tourists believe to have been ghosts.

The business has been running for five years, three of which have been under Ferguson. The previous owner is still involved and trains the business's five guides.

"People want to hear history and see history instead of just bumping around the buildings," Ferguson said. "The old owner started haunted tours because people had heard the legends about the hotels. We try to keep those stories historic."

Kenneth Cooper started Ghost Town Tours with Pat Jacobson and Richard Johnson in the spring of this year. Cooper said people come into the town with their own ideas of what a ghost really is, and the tours are grounded in history.

"Ghost stories wouldn't exist without the history," he said. "I'm more of the skeptic. What we're really selling is the experience, the history and beautiful view. We want to pass on that beautiful history and that wild new territory."

He said Jerome's Ghost Walk is one of the best ways to learn about the events that started the ghost stories. Held Oct. 11 and 12 this year, "Jerome's history comes alive in a guided drama throughout the town," according to the town's Chamber of Commerce website.

Muma said Jerome offers more than sloping streets lined with shops. The atmosphere, view that stretches for miles and history bring people up the mountain.

"All those things combined make it the perfect place for people to come to," he said.