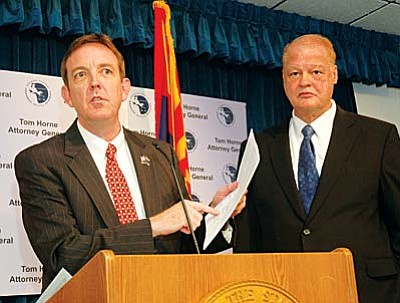 Secretary of State Ken Bennett and Attorney General Tom Horne detail a lawsuit filed Wednesday to force a federal agency to include a requirement on its voter registration forms that applicants provide proof of citizenship. (Capitol Media Services photo by Howard Fischer)

PHOENIX -- Two state officials filed suit Wednesday in a bid to force the federal Election Assistance Commission to let Arizona add a requirement for proof of citizenship to that agency's voter registration form.

Both Secretary of State Ken Bennett and Attorney General Tom Horne admitted they have no evidence that anyone who has used that form -- as opposed to the state's own form -- voted illegally. Bennett said there are up to 13,000 people in that category in just Maricopa County alone, though most voluntarily provided the proof the state wants.

And Nina Perales, attorney for the Mexican American Legal Defense and Education Fund, which sued Arizona successfully for its failure to accept the form, said the state has no such proof because it does not exist.

But Horne called that lack of proof legally irrelevant, not only for Arizona but also for Kansas which joined in the lawsuit.

"Now there's only one issue: Do Arizona and Kansas have the power under Article I Section 2 of the Constitution to determine voter qualifications?' he said. "And if they do have that power, is it unconstitutional for the federal government to tell those states that they are unable to determine the information necessary to exercise that power?'

Wednesday's lawsuit was not only expected. It was actually foretold by the U.S. Supreme Court.

In its June ruling that the state cannot ignore a federal law which requires it to "accept and use' a federal voter registration form authorized by congress and designated by the commission. That form requires only that applicants sign an affidavit wearing they are citizens and eligible to vote.

But Justice Antonin Scalia, who wrote that ruling, said the state remains free to request the commission to add the proof of citizenship requirement to the federal form it designed for Arizona.

Arizona tried that in 2004 after voters approved a measure requiring such proof of citizenship, only to have the request rebuffed in a 2-2 vote.

Bennett renewed the request after the June ruling.

But Alice Miller, the commission's executive director, said it could not act since there are no sitting members. And Miller, in a letter to Bennett, said she was powerless as a staffer to approve such a change in policy absent the commission.

Horne said the lawsuit, if successful, will force Miller to give the go-ahead. But he conceded that whoever loses in federal district court likely will take the case all the way back to the U.S. Supreme Court.

Most of the 3.2 million Arizonans who are registered used a state-crafted form.

Nothing in the June court ruling precludes Arizona from demanding some proof of citizenship for those who use that form, like a legible photocopy of a birth certificate, passport, naturalization documents or Indian census number. A driver's license number can also be used because Arizona law has required proof of citizenship to get a regular license since 1996.

But the federal form is preferred by some groups doing voter registration drives precisely because it does not require those being signed up to have that proof with them.

Horne said there was testimony during the initial trial that about 200 people who were not eligible to vote had in fact been registered. He said they were caught when counties, using voter registration forms, sent out notices calling people for jury duty; they responded that they were not citizens.

But none of those could have been people using the federal form without proof of citizenship: Election officials were refusing to accept them, the reason for the lawsuit in the first place.

Arizona has been required to accept the non-verified forms only in the last year.

Bennett said he does not have statewide numbers. But he said between 12,000 and 13,000 people used the federal form to register in Maricopa County since a federal court ordered compliance last year.

He said most also provided proof of citizenship anyway.

Three applications were rejected because the type of driver's license they cited is issued only to those who are not citizens.

But both state officials said the lack of proof of a problem does not prove one does not exist.

"The point here is that we want only citizens to vote and illegals to not vote,' he said, citing that 200-person figure of illegally registered voters from the trial.

Bennett said that 2004 figure is not isolated.

"I've heard that number just about every year since,' he said, saying that's what counties discover annually through their jury-selection process.

"Now, maybe some of those just don't want to be on a jury,' Bennett said. "But they're either lying on one place or the other. And neither is to be taken lightly.'

Horne said one reason Arizona joined with Kansas in filing suit is because Ken Kobach, its secretary of state, is considered an expert in this area. He also is one of those credited with helping craft Arizona's 2010 law aimed at illegal immigration, though most of that was declared illegal by federal courts.

Horne said, though, that the Supreme Court did uphold the right of Arizona to require police to question the immigration status of those they have stopped for other reasons if there is reason to believe the person is in this country illegally.