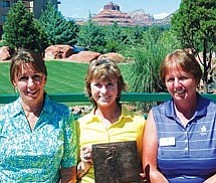 The Arizona Women's Golf Assn. does a great job of arranging playing experiences for all levels of golf, and if you haven't tuned in to these, it's worth a look before the season winds down.

Competitive outings this year have included four in the Northern Region. In July, we had Day in Hades, at Flagstaff Ranch. Allene Richlie won overall low net with a 63, and it's worth noting that her gross score that day was 77. Allene was one of 67 women who came from all over the state, and only four shot in the 70s. What a great day for Allene!

In August, the Mixed Stix tournament was held at Sedona Golf Resort. Lori and Rod Zaun tied Micah Felice and Donna Cantello for 1st flight low gross with a 142, and the Zauns won by card playoff. Carol and Lee Meiner were 1st net in the 7th Flight with a 136. Congratulations to all!

In September, watch for the AWGA Seniors Tournament at Pinetop, a nice little fall getaway in beautiful country. Open to women over 50, with a maximum Handicap Index of 40.4, it consists of 54 holes of stroke play, for a cost of $180.

In October, it's the 2-day Scotch Play at Prescott CC in Dewey. This one is a partners format, open to women with a maximum index of 30.0 (which equates to a 34 handicap at OCC). The competition is 36 holes played according to the Chapman system. Check the AWGA website for details.

At a higher level of competition, the State Medallion tournament is for representatives of clubs who have achieved low net and gross scores over four field days. OCC will be represented this year by qualifiers Donna Cantello and Barb Erickson in January at Sun Lakes.