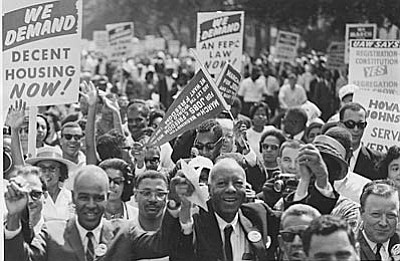 Remembrances of the Aug. 28, 1963, March on Washington for Jobs and Freedom are often overwhelmed by "the speech," Dr. Martin Luther King Jr.'s master class in American rhetoric. But "I Have a Dream" was hardly the only speech given on the steps of the Lincoln Memorial that day, and the original purposes of the great march should not be lost as we look back 50 years later.

The march itself was purposefully organized 100 years after the signing of the Emancipation Proclamation. That put into perspective what had been accomplished in civil rights during the previous century and just how far short the United States was in living up to its promises.

Now, 50 years after the march, we have the opportunity to measure how far we have come and how far we need to go.

The march was a catalyst for landmark civil rights legislation the following year. That was the top goal of the march. But there were others. Some were achieved. Others were not or simply became moot.

From King's speech alone, it is easy to see what has changed in 50 years. Then, simply getting all schools desegregated was still a huge undertaking. Now the challenge is not only creating public schools that give every child a good academic start but also underlining the importance of education.

The old civil rights legislation must be constantly modernized to fit shifting societal issues. In some quarters, enactment was slow and enforcement a constant pursuit. Bullying tactics, both in method and in target, seem to change from year to year.

The march sought broadened Fair Labor Standards, enforcement of the 14th amendment, and a crackdown on bigoted employers. How successful that was and continues to be varies by situation.

The march, and King's speech, aimed for equal treatment and equal opportunity for those struggling to be part of the American dream. In the retrospect of 50 years, they advanced a change in the American character.

While some would argue, and still do, that the march was co-opted and watered down by having white people involved and agreeing to certain stipulations laid out by the Kennedy administration, the massive event helped evolve new and freer thinking about human relations.

Today, 50 years after the March on Washington, 100 years after the Emancipation Proclamation, and with a "person of color" in the Oval Office, we can clearly see what has changed for the better. Given race-based tragedies that continue to occur, however, we see how much farther we have to go in terms of brotherhood, equality and liberty.