Despite rulings in Colorado, Washington, medical marijuana still a legal risk in Arizona 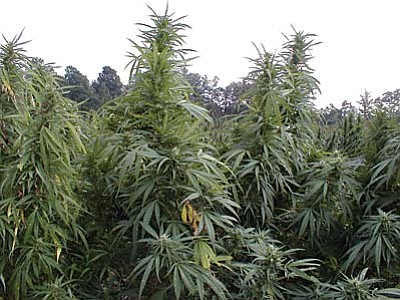 Maricopa County Attorney Bill Montgomery said he will not drop his bid to have the state’s 2010 voter-approved law declared illegal. Montgomery said that, no matter what U.S. Attorney General Eric Holder says about letting Colorado and Washington legalize marijuana, possession and sale of the drug remains a federal crime.

PHOENIX -- A decision Thursday by U.S. Department of Justice not to challenge marijuana legalization by two states does not make Arizona's own medical marijuana law any more legal or acceptable, key prosecutors said.

Maricopa County Attorney Bill Montgomery said he will not drop his bid to have the state's 2010 voter-approved law declared illegal. Montgomery said that, no matter what U.S. Attorney General Eric Holder says about letting Colorado and Washington legalize marijuana, possession and sale of the drug remains a federal crime.

That view is shared by state Attorney General Tom Horne who has joined with Montgomery to void at least part of the law.

"They can exercise prosecutorial discretion and not enforce the law,' he said of the Department of Justice.

"But that's not the issue,' Horne continued. "The issue is that a state law cannot make legal what a federal makes illegal.'

In a four-page memo Thursday to all federal prosecutors, James Cole, the deputy federal attorney general, conceded as much. But Cole, in "guidance' to those prosecutors, said they should, in essence, leave such questions of the sale and possession of small amounts of marijuana to the states.

Cole said that is not a license for states to do anything they want. He said any decision by federal prosecutors to essentially turn a blind eye to state practices is conditional on them having sufficient safeguards in their systems, such as preventing the distribution of marijuana to minors and ensuring that the drug is not diverted to other states where possession remains illegal.

The willingness of federal prosecutors to not try to disturb laws allow the sale and use of marijuana for recreational purposes virtually certainly means that more restrictive programs for medical use, like the one in Arizona, will also remain under Department of Justice radar.

Arizona law permits someone who has one of a specific list of medical conditions and doctor's recommendation to obtain up to 2 1/2 ounces of the drug every two weeks.

The law also has the state Department of Health Services licensing about 100 dispensaries to sell the drug legally to those with state-issued cards. And the health department has set up inventory control regulations to ensure that what is grown for medical use is not diverted for anything else.

More than a dozen states have similar laws.

The Department of Justice never gave approval for any of them but, until now, generally took the position it had more pressing issues to pursue than medical use of marijuana, though federal agents did raid some large distributors in California. But that policy ran smack into the decision by voters in Colorado and Washington to let all adults use the drug just for the heck of it.

In some ways, the now-revised policy is not a surprise. It was foretold in December when President Obama was asked about what the two states adopted.

"We've got bigger fish to fry,' he said. "It would not make sense for us to see a top priority as going after recreational users in states that have determine that it's legal.'

But Montgomery pointed out that the Obama administration has not asked Congress to repeal laws which make marijuana possession a felony.

"If you want to do this, there's a process,' he said. "But you can't simply say 'that's the law but for at least the next three year's we're not going to enforce it.' '

He also noted the position taken by the Department of Justice is strictly policy, meaning a new administration taking office in 2015 could reverse it. More to the point, there is a five-year statute of limitations, allowing whoever is the new attorney general to direct federal prosecutors to file charges for things that are occurring now.

In December, Maricopa County Superior Court Judge Michael Gordon rejected arguments by Horne and Montgomery to have the 2010 Arizona law declared illegal because of federal preemption.

Gordon pointed out that 18 states and the District of Columbia already have laws permitting some form of legal marijuana use. And the judge said he wasn't about to declare Arizona's own version invalid.

"This court will not rule that Arizona, having sided with the ever-growing minority of states and having limited it to medical use, has violated public policy,' he wrote.

Horne, who is appealing along with Montgomery, said that ignores the fact that the federal Controlled Substances Act classifies marijuana as a Schedule 1 drug for which there is no legitimate medical use. He said that preempts state laws.

Gordon agreed the 2010 initiative allowing the medical use of marijuana reflects "a very narrow but different policy choice' about the drug. But he said the fact Arizona has a different view of the drug does not conflict with or illegally undermine the federal law: Federal agents remain free to arrest Arizonans who violate federal law.

Montgomery also was a bit bemused at what he said amounts to a stance by the Obama administration that it will defer to the wishes of each state -- at least on this issue. He said that runs contrary to much of what else has been coming out of Washington like health care mandates.

PHOENIX -- You may have a state-issued card allowing you to buy and use marijuana for medical purposes.

But the state's top health official warned Friday that medical marijuana soda pop or hard candy you bought may still land you -- and the dispensary owner who sold it to you -- in jail.

State Health Director Will Humble said the 2010 voter-approved law clearly contemplates that those authorized to sell and use marijuana for medical reasons need not smoke it. Food products are legal.

But Humble cautioned that the law is crafted to require that the food products contain actual pieces of the marijuana plant. He said anything that contains only an extract remains a felony in Arizona.

Humble said he's not an attorney and cannot define exactly when preparing marijuana for brownies, sodas or lollipops crosses the line. But he said the statute is very clear that only "useable marijuana' is legally protected and not the extracts minus the plant.

What that means, he said, is someone with a medical marijuana card could legally make, sell or possess a tea bag with marijuana. But selling -- or even possessing -- the brewed tea in a bottle, with no plant material, could be a felony.

Attorney Ryan Hurley, whose clients include dispensary owners, acknowledged that Arizona law does make a difference between marijuana as defined in the 2010 law and what he called an "archaic' definition of marijuana extracts that are illegal under the criminal code. And he conceded the Arizona Medical Marijuana Act does not include extracts.

But Hurley said he believes it was always the intent of those who crafted the law to allow food products made from extracts.

That's also the contention of Morgan Fox, spokesman for the Marijuana Policy Project which crafted the Arizona law. He said the statute allows use of not only marijuana but also any "preparation' of the drug, which he said includes extracts.

"I have no doubt that the state will be challenged if it tries to exclude edible marijuana products from protection,' he said.

By contrast, Jeffrey Kaufman, who also represents dispensary owners, said the issue may come down to how the THC -- the psychoactive ingredient in marijuana -- was extracted.

On one hand, he said it's illegal to make hashish or hash oil, the concentrated resins containing the THC, using a butane extraction process. And that would make any food products made with those items illegal.

But Kaufman said he believes there's nothing wrong with extracting THC through a freezing and filtering process and then using what's produced in recipes.

Humble isn't ready to make that kind of distinction, calling it one of the "gray areas' in the law. But he said state health inspectors will soon be taking a closer look at the recipes of the food products being sold at marijuana dispensaries and advising operators when they think the items are not protected by the law.

The 2010 laws says those with a doctor's recommendation can get 2 1/2 ounces of "useable marijuana' every two weeks. And the law defines that as being the plant, minus the stems and seeds.

But the criminal code has two definitions.

And Humble said the 2010 law did not legalize cannabis.

"You can produce edibles,' he said. "But you'd better make sure it's made of 'useable marijuana' as covered under the Arizona Medical Marijuana Act and not extracts and resins' which remain illegal under the state's criminal code.

The problem is where to draw that line.

"Hashish is clearly a resin or extract,' Humble said, and not protected under the medical marijuana law. But he said that, in making food products, there be "a shade of gray that's up to somebody's interpretation of the law.'

"What we're trying to do is to let folks know to stay away from those shades of gray because it could be problematic for them,' Humble said.

"Avoid using extracts in your recipes and stick to what you believe is 'useable marijuana' as defined under the Arizona Medical Marijuana Act,' he continued. "If you can do that, you're probably going to be OK.'

Humble said the initial offerings at the approximately 80 dispensaries now open were pretty much limited to various varieties of the flowers and leaves of marijuana plants.

"What we're starting to see is more diversification in the product mix,' he said.

Humble said inspectors will now start to take closer looks at the various food products being sold. If they conclude the items were made with extracts, they will advise dispensary owners of the possibility of winding up facing criminal charges

At the very least, he said dispensaries that do not come in line could eventually face having their licenses to sell marijuana revoked.
Report a Typo Contact
Sign up for our e-News Alerts
Most Read
7 days
30 days