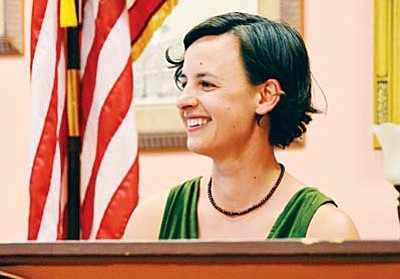 Mayor Nikki Check: “It’s actually more of a statement than anything, but applies to anyone who works for the Town of Jerome. It would mean quite a bit more if the collective Verde Valley put something through.”

Jerome became the first Verde Valley town to recognize civil unions after the council adopted an ordinance on July 30.

Jerome Mayor Nikki Check sponsored the ordinance, which had its first reading July 9, and said it's the type of change the town would support.

"We had no town opposition, no one even showed up to speak on behalf of it," she said.

For a fee of $73, couples that file for civil unions will be eligible to receive partner benefits like health insurance. Bisbee has a similar law, and Check said Sedona's council is looking at doing the same at its next meeting.

"It's actually more of a statement than anything, but applies to anyone who works for the Town of Jerome," Check said. "It would mean quite a bit more if the collective Verde Valley put something through."

In June, the Supreme Court struck down the portion of the Defense of Marriage Act that prevented the federal government from recognizing same-sex marriages. Those couples receive the same rights as married men and women including, as of Thursday, federal tax recognition.

States retain the right to decide on marriage individually, which Arizona voters did in 2008 when they approved a ballot proposition that established marriage was between one man and one woman.

"Sometimes small victories are a good thing," Kramer said. "You start locally in the hope that it will catch on."

The fact that Bisbee and Jerome have recognized civil unions shows that there are people in the state who are acting locally, Kramer said.

"It's really rare for social change in civil rights to start at the federal level," he said. "Most change happens in communities."

The purpose of the ordinance is to support "the right of every person to enter into a lasting and meaningful personal relationship with the partner of his or her choice, regardless of the gender or sexual orientation of the parties to that relationship," as is now stated in chapter 17 of the town code.