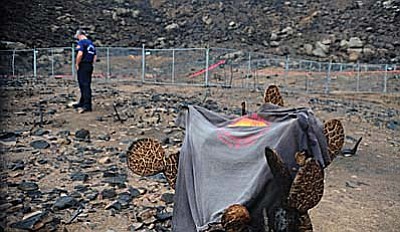 The Arizona Division of Occupational Safety and Health is proposing citations and penalties against the Arizona State Forestry Division in the June 30 death of 19 Hotshot crew members from Prescott.

The Industrial Commission of Arizona is scheduled to consider the citations and penalties during a public meeting at 1 p.m. today. The commission has the final say on the recommendations.

The commission released its meeting agenda Tuesday morning that states only that the Arizona Division of Occupational Safety and Health is proposing citations and penalties against the State Forestry Division.

The agenda didn't mention any fines against the City of Prescott, which employed the 19 Granite Mountain Hotshots who died. At the time, the men were contracted out to work for the State Forestry Division.

The commission will not provide any more details on the recommendations and related report until the commission meets to make a decision, a spokesperson said.

The Hotshots died fighting the Yarnell Hill wildfire about 30 miles south of Prescott.

The State Forestry Division was in charge of the fire since lightning ignited it on state trust lands.

The Forestry Division commissioned a report by outside experts that avoided laying blame directly on any agencies or people. It was released in late September.

The report said the Hotshots were properly trained and prepared for their jobs as elite wildland firefighters, contrary to some speculation, noted Pete Wertheim, City of Prescott spokesman. The second and final report will be another important piece to putting speculation to rest, he said.

Both Wertheim and Dennett said their agencies are not getting advance copies of the report and its recommendations.

Division of Occupational Safety and Health officials previously said the new report and recommendations would be posted online when the decision on recommended citations is final.

The 19 Hotshots died June 30 when the Yarnell Hill wildfire overran their hastily created safety zone just west of Yarnell. It was the highest Hotshot fatality in a single incident in U.S. history.

The September report shed light into numerous factors that contributed to the tragedy.

The Hotshots left a safe area where the fire already had burned, heading down a steep hillside toward Yarnell when the wildfire switched directions and started heading toward the community.

During the last 30 minutes of their lives, the Hotshots clearly thought they could reach a pre-designated safety zone 1.6 miles away. But as they headed down into the boulder-strewn bowl where they could no longer see the fire to the north, they had no idea that the fire had shifted from moving southeast to moving south directly toward them.

The Hotshots also were unaware that the fire had reached the extreme speed of 10-12 mph, pushed by a horrifying outflow that produced winds topping 50 mph.

The report noted that the Hotshots had not received a weather update for 50 minutes during the rapidly changing conditions.

The fire trapped them at the base of the box canyon, 0.38 miles from the designated safety zone, at 4:41 p.m. They radioed to others that they were deploying their shelters.