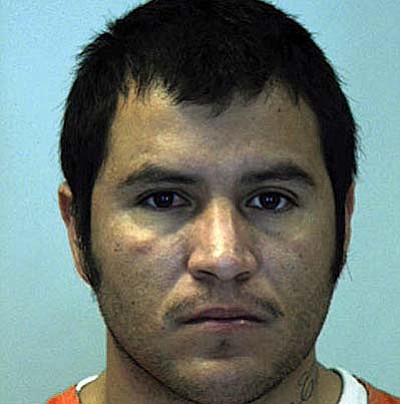 PRESCOTT - A clearly frustrated deputy county attorney on Wednesday asked a judge to appoint a second attorney to Cesar Garcia-Soto so his death-penalty murder case could move forward.

Garcia-Soto, 31, Village of Oak Creek, was arrested in February 2008 and charged with first-degree murder and two counts of child abuse in connection with the death of his 3-month-old son. Deputies also arrested the child's mother, Gladys Yamileth Rodriguez-Paz, who was not home at the time, saying she could have acted to stop the abuse.

Rodriguez-Paz pleaded guilty to one count of child abuse in 2008 and was sentenced to a year in prison.

But Garcia-Soto's case, which has progressed slowly for several years, has now come to a standstill.

The problem arose when his attorney, John Napper, refused to travel to the part of Mexico in which Garcia-Soto lived at one time to conduct interviews. "The United States State Department has issued a warning asking all American citizens not to travel to that portion of Mexico (Cuidad Juarez in Chihuahua)," he said. He added that he felt it would be "morally and ethically repugnant" to risk anyone from his staff.

But because rules require a lawyer to undertake "an exhaustive investigation into the history and life" of death-penalty clients, and Napper said he couldn't do that, he tried several times to withdraw from the case.

Last year, Napper said in court that he would not take part in the mitigation phase of the trial if his client was found guilty, calling it a "farce," and Hancock said that if he refused to do so, "the court is duty-bound to report such action to the State Bar of Arizona."

Then Napper's co-counsel, Dennis Jones, quit because of a medical problem.

Since that time, public defender Dean Trebesch has been looking for a "death-qualified" replacement - a "second-chair" attorney is a requirement in capital cases - but no one will take the job, and he is running out of options.

But, he said, the bigger reason is that they don't want to get into a legal quagmire if Napper, who is the lead counsel, does end up the subject of a report by Hancock to the bar.

Hancock said she was "a little bit irritated" that her statement was being taken as a threat, but Napper, who has apologized for using the word "farce," said he still won't put on the mitigation portion of the trial.

"This court and this state are being held hostage in this case," he said. "Nothing prevents (Hancock) from appointing an attorney."

Hancock said she would need to research the issue and determine whether a judge could involuntarily appoint a lawyer. She asked for written argument from both sides.

"When I hear that 'we can't find anybody,' and that's it, I don't know what the defense wants us to do," she said.

Ahler said a plea offer was on the table, but Napper was not convinced that he could negotiate without his co-counsel in place.

"I'm doing my best," Napper said, "walking through a minefield that I can't see the end of."