Forestry Division to be fined $559K over Hotshots' deaths: Commission finds agency put protection of property ahead of safety 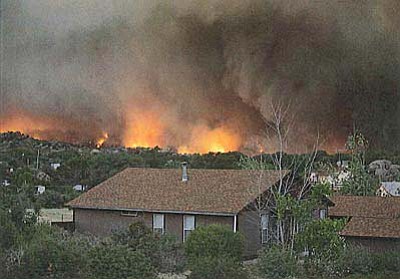 The Arizona Industrial Commission Wednesday approved $559,000 worth of fines against the Arizona State Forestry Division in relation to the June 30 deaths of 19 Granite Mountain Interagency Hotshot Crew members from Prescott.

The Arizona Division of Occupational Safety and Health recommended the fines and conducted the investigation. It was one of the largest penalties the agency has ever assessed. The agency concluded that State Forestry placed a higher priority on protection of homes and property than firefighter safety.

When the Yarnell Hill wildfire shifted directions on June 30 and headed toward Yarnell, about 30 miles south of Prescott, the 19 hotshots left the safety of a burned area without notifying their superiors and headed east toward Yarnell by hiking down into a steep bowl choked with vegetation and boulders.

The fire switched directions again while the hotshots were hiking down the hill without the aid of a lookout, then trapped them at the base of a box canyon at about 4:40 p.m. as it reached extreme speeds of 10-12 mph pushed by a storm outflow with winds topping 50 mph.

It was the highest hotshot fatality in a single incident in U.S. history.

The ADOSH investigation said the surviving crew member, Brendan McDonough, might have suffered the same fate had he not been picked up by another hotshot crew leader who happened to be driving by after McDonough radioed in to say his trigger point had been reached.

"Essentially, it was in the nick of time and he didn't have to deploy his shelter," said Marshall Krotenberg, the ADOSH lead investigator, during the Industrial Commission meeting Wednesday.

The fire destroyed more than 100 homes and burned 13 square miles before it was fully contained on July 10.

Fire managers should have removed firefighters from the south side of the blaze an hour before the monsoon's first thunderstorm arrived that ultimately shifted wind direction and trapped the Granite Mountain Hotshots, Krotenberg said.

"The storm was anticipated, it was forecasted, everybody knew it," he said. "But there was no plan to move people out of the way."

Besides various fines of $84,000, the Arizona Division of Occupational Safety and Health (ADOSH) is requiring State Forestry to pay $25,000 to the survivors or estate of each of the 19 hotshots, totaling $475,000. State law provides for a $25,000 fine for willful employer violations that result in injury or death.

The Industrial Commission of Arizona unanimously backed the ADOSH findings, fines and citations during its meeting in Phoenix Wednesday. State Forestry has 15 working days to contest the citations.

The commission's chairman, David Parker, said he believed the fire management team on site did everything in its power to defend the community and provide for the safety of people.

"But it's not the intention of the people that (is) in question, it's that employees remained exposed after they no longer should be exposed," he said.

ADOSH took a starkly different stance on its investigation into the deaths of the hotshots than an investigation led by an ad-hoc national team of experts assembled by the Arizona State Forestry Division.

While the State Forestry team declined to use names and avoided placing direct blame in its September report, the Division of Occupational Safety and Health (ADOSH) placed ultimate blame squarely on the shoulders of the State Forestry Division itself.

"Investigations to determine whether occupational safety and health violations have occurred are critical to the protection of employee safety and health," ADOSH Director Bill Warren said in a written statement. "There are lessons that can be learned from this horrible tragedy and we owe it to the firefighters who died, and to those that risked their lives fighting the Yarnell Hill Fire, to do so."

A consulting team of wildland fire experts from a company called Wildland Fire Associates helped ADOSH paint a picture of the chaotic events on the Yarnell Hill wildfire June 30.

The State Forestry Division was in charge of the fire since lightning ignited it on state trust lands June 28 and it burned primarily on state and private lands. The Type 4 and Type 2 command teams both were assembled by state officials.

"The citations against ASFD allege that it mismanaged the fire when it failed to prioritize the safety of firefighters over the protection of non-defensible structures and property, failed to develop the necessary action plans and fire analysis, and failed to provide necessary and key incident command personnel," ADOSH summarized in a news release.

These failures led to other problems such as poor radio communications, lack of maps for firefighters including the Granite Mountain Hotshots (who might have been confused about the distance to safety), and lack of understanding between ground and air resources about suppression plans and objectives, ADOSH concluded.

As an example of the latter problem, the Wildland Fire Associates investigation noted that air support dropped retardant on an apparent test fire the Granite Mountain Hotshots had ignited, while the pilots didn't know to support a fire line an adjoining crew was cutting.

The Granite Mountain Hotshots worked for the City of Prescott, but they were contracted out to State Forestry to help battle the wildfire. ADOSH concluded all 20 hotshot crew members met the basic national qualifications for hotshots, city officials noted.

Prescott fire officials declined to comment further on Wednesday. The fire chief was out of town.

Forestry Division officials said Wednesday they cooperated with the ADOSH investigation but they had not reviewed ADOSH documents, so they couldn't comment on the fines.

The ADOSH report noted that State Forestry originally allowed ADOSH to participate on its team of experts, but two days later the team leader and State Forestry director told ADOSH the team would continue without ADOSH.

Unlike the U.S. Bureau of Land Management, the U.S. Forest Service did not allow ADOSH investigators to interview any of its employees, including the Blue Ridge Hotshots that had the most contact with the Granite Mountain Hotshots on June 30.

The Forest Service provided a document to ADOSH that was so heavily redacted it was useless, ADOSH wrote.

Common tactical hazards that create a higher level of risk include poor communication because of a rapidly emerging small fire, and firefighting in wildland-urban interface areas, the NWCG guide adds.

"The employer knew that suppression of extremely active chaparral fuels was ineffective, knew that the active fire was pushing towards non-defensible structures, and knew that employees were working downwind of a rapidly progressing wind driven wildland fire in furtherance of suppression strategies that were implemented to protect structures known to be non-defensible," the document supporting the citations said. Fire managers "failed to re-evaluate, re-prioritize and update suppression efforts and failed to promptly remove employees working downwind of the fire."

Fire managers should have ordered a Type I incident management team instead of a "short" Type 2 team on June 29 to replace the existing Type 4 team, ADOSH concluded.

"The correct incident complexity was eventually chosen ...however, it was more than a day late and resulted in the exposure of hundreds of firefighters to complex fire hazards that may have otherwise been controlled by an adequately staffed fire response operation," said an ADOSH document backing up the citations.

ADOSH summarized, "The fire was originally managed by a Type 4 incident commander. On the evening of Saturday, June 29, following the failure of initial attack efforts, fire complexity changed from a Type 4 incident to a Type 1 incident. Rather than conduct a complexity analysis, fire management assigned a Type 2 short team to manage the fire.

"The Type 2 incident command team members arrived at different times which prevented key personnel from involvement in the development and implementation of fire suppression plans.

"Once fire activity picked up on the morning of Sunday, June 30, incident command became overwhelmed resulting in multiple firefighter exposures to smoke inhalation, burns and death."

Following is an explanation of the Arizona Division of Occupational Safety and Health (ADOSH) citations, using ADOSH documents.

 Willful serious violation: when State Forestry knew that suppression of the wildfire was ineffective, they failed to remove downwind firefighters when incident commanders evacuated their own post at 3:30 p.m. on June 30. ($545,000 fine)

The citation lists four incidents in which a total of 81 firefighters should have been ordered to leave sooner.

Incident #1: 31 members of a structure protection group were left to protect what had been analyzed as non-defensible structures in the Double Bar A Ranch area north of Yarnell, after residents were evacuated.

Incident #2: Granite Mountain Hotshots lookout Brendan McDonough was not ordered to leave sooner than he ended up leaving on his own.

Because of the increased fire activity, Frisby changed his plan and turned around, taking McDonough east to safety.

McDonough told investigators that without a ride from another hotshot crew, he would have been forced to deploy his shelter because the fire would have overrun him.

Incident #3: 30 firefighters continued indirect attack activities in Division Z on the edge of Yarnell and ended up leaving on their own.

 Serious violation #1: State Forestry failed to implement plans consistent with its own guidelines and policies ($7,000 fine). ADOSH listed three examples of this.

Example #1: When the fire escaped initial attack June 29, State Forestry did not conduct an incident complexity analysis that would have led to an order for a Type 1 team instead of a short Type 2 team.

Example #3: After the fire escaped initial attack June 29 and prior to transitioning to a higher-level team, fire managers didn't create an Incident Action Plan containing objectives and other information for the incoming Type 2 team.

 Serious violation #2: Critical Type 2 team members arrived late or were absent when the team took over the battle against the wildfire ($7,000). ADOSH listed two examples of this. ADOSH noted that the Type 2 commander took over command earlier than planned June 30 when he realized the Type 4 commander was exhausted after 30 straight hours on the job.

Example #1: The safety officer and planning section chief positions were unfilled for hours on June 30 and therefore unable to participate during critical planning and oversight operations.

Example #2: The Division Z supervisor Rance Marquez left his position at 1:30 p.m. on June 30, a half-hour after arriving, leaving the division without supervision.

Marquez' radio wasn't working properly and there was confusion about the boundaries between his division and Division A.

Marquez and Division A Supervisor Eric Marsh (earlier elevated from his position as Granite Mountain Hotshots superintendent) met and disagreed about how to proceed, and then Marquez left his position and never returned. Fire managers never replaced him.

The lack of a Division Z supervisor left crews unsure when to evacuate in the face of a rapidly progressing fire at 4 p.m. on June 30. They retreated to Yarnell with the lone surviving Granite Mountain Hotshot.

Marquez was never interviewed by ADOSH officials, who wrote that he never returned repeated phone calls. He works for the U.S. Bureau of Land Management, which allowed ADOSH to interview its employees.

Marquez wasn't the only one to leave and not return.

Air attack pilot Rory Collins abruptly left the fire at 4 p.m. on June 30 and turned air tactical operations over to the lead plane pilot, who was already busy with other duties and didn't know the locations of division breaks or firefighters on the ground.