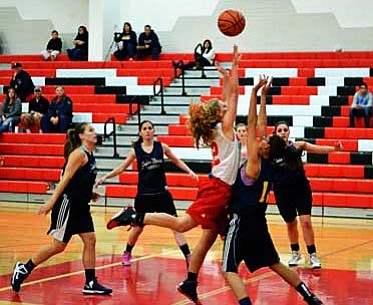 Five games into the season, the Mingus Union girls' basketball team is sitting pretty above .500 with a 3-2 record.

It began with four games at the Queen Creek Turkey Shootout, and was capped off by beating the Scorpions from Sedona Red Rock.

The four games played at the shootout were against the likes of Desert View, Skyline, Queen Creek and Kellis. In the games, the Marauders opened things up with a 47-21 win over Desert View and alternated wins and losses from there.

"I think it's going pretty much as expected because over that weekend, something just happened and everyone played really good in the tournament, especially against Queen Creek," said senior Heather Calandra. "And then we came out here and it just continued to go on, but I think we're on the right track."

The game against Queen Creek, a Division-II, Section-IV school, was a closely contested affair. But after the final buzzer, it was the Marauders that were the victors with a 49-43 win.

While the girls had two good wins over Desert View and Queen Creek, they also had two losses that could have potentially been avoided. Mingus Union's first loss of the season was to Skyline. The Marauders were within three, but a breakdown on defense was the girls' undoing.

With Queen Creek in their rearview mirror, The Marauders headed back to Cottonwood to prepare for their home opener against rival Sedona. Sure, Mingus' main rivals may be Flagstaff and Camp Verde. But since the Marauders are not facing the Cowboys in any games this season, a spirited rivalry with the Scorpions was increased due to geographic location.

The Marauders had two big quarters to propel them to the win, a 70-52 torching of the Scorpions.

"It was exciting," Moncibaez said. "We always look forward to a rival school like Sedona or Camp Verde, so it was a fun win for us. Our press was pretty effective. From time to time, it broke down and they got some easy ones off of us, which kind of kept them in the game at half time, but we started pulling away towards the end."

First was the opening stanza, in which the girls dropped 25 points on Sedona, compared to the Scorpions' 15. The other big quarter was when both teams came back from the break. The visitors managed 10 points, but that was not nearly enough to stay pace with the home team's 22.

"It felt really good, especially since we only won by 1 last year. It was nice to get a good lead and finish the game strong," said senior Lexie Kleinman.

Going into the break, it was a close game. The Marauders only had a 10-point lead. That was the only quarter a team failed to hit double digits. In the final stanza, the Scorpions did their best to make it a game, but they were only able to outscore Mingus 16-14.

"When they would press us, they would have a girl in the back and ... we wouldn't get back as fast as we needed to get back to get the girl," Kleinman said.

As evident by the score, the girls can score. The Marauders are a fast-team. With runners like Monica Soliz and Kylie Streck, they can break away and drive to the hoop for a quick two. But as Moncibaez said, while they scored 70, they also gave up 52.

"When these girls run, they can run, and most of those points came off of lay-ups, so that tells you how quick this team can be," Moncibaez said. "Seventy points is a good margin of points and Sedona had 50 though, so we actually gave them 50 when we should have just hustled back a little more to lower their point scores."

While the season is going well for the team and the coaches are seeing what they expected, there have been some pleasant surprises. Senior Amber Rippy, a transfer from Sedona, has been a boost for the Marauders with Angel Chavez out with an injury. Two other players that have stepped up so far are Soliz and Streck. Moncibaez is happy with how the two have grown into defending the press.

"One big surprise was Amber. To tell you the truth, we really don't remember playing against her last year, but she was a big surprise. She's an added plus to the team," Moncibaez said. "...I think our guards, Monica and Kylie, played tough defense on the press. They're really maturing and grasping their roles up on the press."

With the Marauders over .500, the next step is stringing wins together and building some momentum. To do that, it will take a bigger defensive showing and shoring up of errors at games.

"Working on the silly mistakes and getting our injured players back in, that's going to help a lot," Calandra said.

Next for Mingus Union is a game at Payson High School. The Marauders will look to build some momentum against the 0-2 Longhorns at 6 p.m. on Dec. 12.