Deputy stops car for slow driving on I-17, arrests two on drug charges 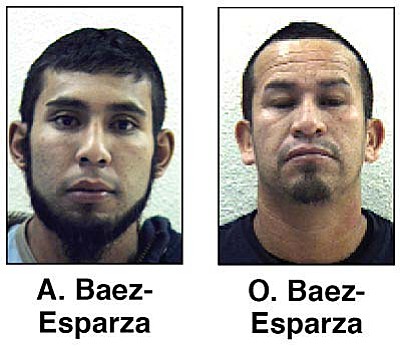 NEAR CAMP VERDE -- A deputy who stopped a car from driving too slowly on the freeway Sunday morning discovered a load of methamphetamine and marijuana inside and arrested the driver and passenger, a sheriff's spokesman said.

The deputy stopped the Cadillac sedan at about 9:15 a.m. for an equipment violation and for impeding traffic by driving at least 20 mph below the speed limit on I-17 near the General Crook Trail exit, YCSO spokesman Dwight D'Evelyn said.

Once the car stopped, the driver, Oscar Baez-Esparza, 34, and passenger Alejandro Baez-Esparza, 22, both from Texas, "exited and walked back to the deputy in an apparent attempt to disassociate themselves from their car," D'Evelyn said.

Oscar told the deputy that he and his cousin, Alejandro, were heading to Texas, but "seemed confused about the origin of his travel location and reason for being in the Phoenix area," D'Evelyn said.

The deputy spotted a plastic bag on the floor of the car, which he believed contained meth, D'Evelyn said.

Oscar denied carrying anything illegal in his car, and gave the deputy permission to search it, he added.

The deputy checked the contents of the plastic bag and found it contained seven pounds of meth in wrapped bundles, and D'Evelyn said, in the trunk, he found 65 pounds of marijuana wrapped into nearly 20 packages.

The pair faces multiple charges, including transportation of meth and marijuana for sale. They're being held without bond at the Camp Verde jail.