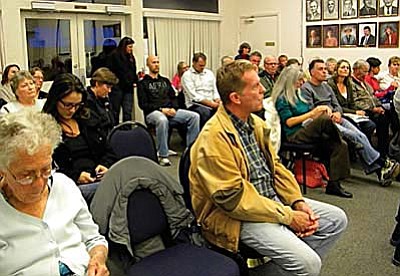 The Cottonwood City Council Chambers were filled to capacity Dec. 3 during the first reading of the city’s proposed civil unions ordinance. VVN/Jon Hutchinson

The last time the Cottonwood City Council met, it faced one of its biggest audiences of the small council chambers. All were ready to talk about civil unions.

Some told the council they should not allow a code that would give equal rights to those in same-sex relationships, some promised it would lead to a darker future.

But a large gathering who admitted they are now 'gay' or know people who are urged the council to join other cities and towns that have given the same protections to their employees.

Tuesday (6 p.m., 826 N. MAIN ST.), the council, which by a majority voiced their support for civil union tolerance, is expected to take the final step and vote to approve the new Ordinance 604, amending the city code to provide for a new Title 16 Civil Unions.

In the other major action of the night, the council is prepared to approve the intergovernmental agreement for the Department of Transportation that fix the seven full access points between Thousand Trails and Interstate 17.

All six governments must approve the agreement for the four-lane traffic of State Route 260 to Camp Verde to go forward.

The city council will also be asked to give direction to the city staff in reference to off-premise signs. Community Development Director Berrin Nejad has researched a "way finding" option that has been embraced by other communities to provide internal directions.