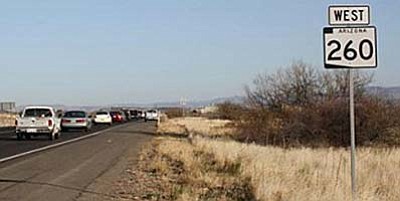 COTTONWOOD -- At least one of the five municipalities, Yavapai County and the Yavapai-Apache Nation has signed on to the intergovernmental agreement for SR 260 four-lane project. But the Department of Transportation wants all seven governments to OK the access plan before the project is fully funded.

The City of Cottonwood accepted the agreement this week.

The IGA would limit the number of full access points on the highway to seven, of which five are existing intersections. The section within the boundaries of Cottonwood was upgraded to four lanes nearly 10 years ago. The Thousand Trails intersection is the only access point within of the $66 million budget within the city limits. It is proposed to be converted to a roundabout.

ADOT Prescott District Supervisor Alvin Stump says the roundabouts as opposed to signalized intersections are safer and will assure that the level of service on the highway remains at "B" for a long time.