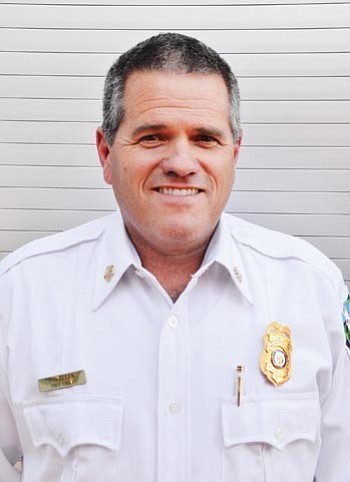 CAMP VERDE -- The Camp Verde Fire District board has announced that they have verbally agreed to hire Terry Keller as their next fire chief. A search for a new chief began last August when current Chief Clayton Young announced that he planned to retire on Feb. 1, 2014, after a 39-year career with the district.

Chief Keller worked for the Sedona Fire District for 24 years. After retiring from Sedona, he accepted the chief's position with the Montezuma-Rimrock Fire District a year ago.

Steve Darby, chairman of the CVFD board states, "We are excited about a new era of leadership with Chief Keller. He will start after the 1st of February".

Darby says the district hired an independent human resources company to recruit candidates. They screened applicants to the best four, who went through an intensive set of interviews, and Keller rose to the top.

There could also be a cost savings in store if there is a joint agreement between the Camp Verde and Montezuma-Rimrock fire districts.

The Camp Verde Fire District has expressed interest in contracting chief services to MRFD, a move that would result in taxpayer savings for both. That contract would need to be worked out and mutually agreed upon by both districts.

Keller says "time will tell" if overseeing two districts is manageable. But, he says, districts need to be creative in this time of diminishing revenues.

Both Darby and Ken Krebs, chairman of MRFD board, seem positive about shared services.

Krebs says, "We already signed an intergovernmental agreement, not long ago, for sharing reserve firefighters. We already respond to mutual aid with Camp Verde anyway, so it actually provides better continuity" between the two companies.

But, he cautions, "We have to look at everything and take it slow and make sure it is in the best interest of our individual districts."

Keller says the economic downturn during the recession has really stretched budgets in all fire districts across the state. With assessed property values diminishing, so have tax revenues to fund fire services.

The Camp Verde district has "maxed-out its tax levy" and Montezuma-Rimrock is approaching that limit.

The bottom line, says Keller, is the "elevator doesn't go to the next floor."

To aggravated the issue, voters in 2012 approved Proposition 117 which limits the growth of property taxes to only 5 percent each year, meaning it could take years to recover lost capacity.

At the same time, Keller says equipment continues to age, so they have to look at other options to shed costs.

Krebs believes shared services or a joint-services agreement is a better tact than merging, where he says, a district would lose revenue.

Keller has been "awesome" since coming to Montezuma-Rimrock, Krebs agrees.

While there has been talk about a shared-services contract, no decisions have yet been made. There still needs to be more talk, analysis and decision. But both sides see a number of positives in the future.