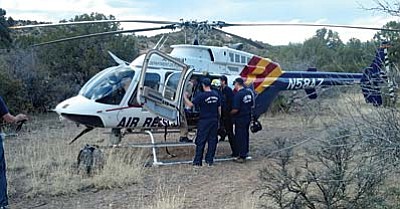 CAMP VERDE-Rescue crews were sent to the Copper Canyon Trail Wednesday mid-afternoon. Two men were hiking the trail about one and a half-miles from the trailhead off of Salt Mine Road when one hiker felt pain in his chest and became dizzy.

The second hiker was able to find a location where he could get cell service and called 911. Camp Verde Fire District units responded to Forrest Service Trail 545, also known as Copper Canyon Trail, to rescue the hiker.

Fire crews were able to drive most of the trail to a mesa, and then they hiked down into the canyon to reach the patient.

After paramedics assessed the hiker, it was determined that the seriousness of the medical situation and rugged location made it necessary to fly the patient to the nearest medical facility. DPS' Ranger helicopter was dispatched airlifted the man out of the canyon. Courtesy Camp Verde FD