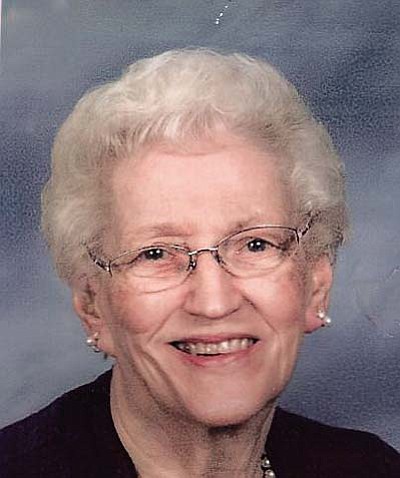 She was born in Kalamazoo, MI on January 23, 1926, the daughter of Garrett and Charlotte Nuyen. She attended Kalamazoo Central High School until the outbreak of World War II. She married her high school sweetheart just prior to him leaving for the European front.

Three years after their wedding they were reunited and began their family. She returned to finish her High School education later in life and became a Licensed Practical Nurse. Her joy of life and infectious laughter made her perfect to care for those in their time of need. She met “Pete” Keene of Allegan and they formed a bond and were married in 1978. They loved traveling.

After his death she moved to Cottonwood where she remained for 30 years. After moving to Cottonwood she immediately became involved in the local Verde Baptist Church. Her love of her family and church was the foundation of her life. Virginia “Ginny” loved to read, and more importantly laugh.

Her idea of a great time was sharing funny stories with friends and family.

Virginia, is survived by two sons Roger (& Virginia) Bishop of Cape Elizabeth, ME, Larry (&Judy) Bishop of Plainwell, MI; two daughters, Janet Westcott of Cottonwood, AZ and Diane (&Paul) Bartz of Bloomingdale, MI. She was preceded in death by her husband, Pete Keene, brothers, Norman and Gordon Nuyen and sister Barbara Lewis. Virginia was the proud grandmother of 10 children and great grandmother of 5, and many nieces and nephews. A celebration of Virginia’s life will be held on Saturday, February 16 at 11a.m. in the Verde Baptist Church Chapel in Cottonwood.

In lieu of flowers, memorial contributions can be made to: ALS Society, www.alsa.org.