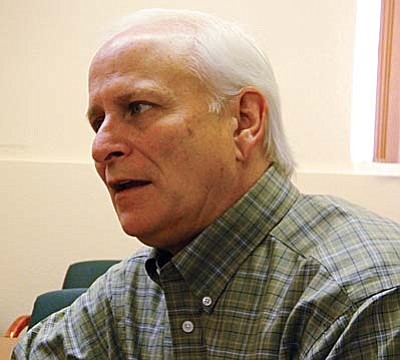 City of Cottonwood Natural Resources Director Tom Whitmer, who worked for the Arizona Department of Water Resources for 14 years, sent out an email to Yavapai County Water Advisory Committee members this week urging them to call legislators about their support for the bill.

Local water officials are being urged to rally to the support of Arizona House Speaker Andy Tobin's major water legislation, in the face of potential opposition from the state's agricultural community.

House Bill 2338 is scheduled for a House committee hearing on Tuesday. The bill allows local governments and private entities to create public "regional water augmentation authorities" that would help augment local water supplies and infrastructure by allowing members to pool their efforts.

The bill seeks a $30 million general fund appropriation this year for the state's Water Supply Development Revolving Fund, which has never received any money. The augmentation authorities could then get low-interest loans from the fund.

City of Cottonwood Natural Resources Director Tom Whitmer, who worked for the Arizona Department of Water Resources for 14 years, sent out an email to Yavapai County Water Advisory Committee members this week urging them to call legislators about their support for the bill. He heard the ag community is voicing opposition to the bill to legislators.

"The best thing they can do right now is try to inform legislators of the reality of what this bill can and cannot do," Whitmer said. "There's a lot of misinformation out there."

Water officials throughout the state already have registered their support for the bill, including the Municipal Water Users Associations for northern Arizona, the Phoenix area and the Tucson area, Whitmer noted. So have local communities such as the Prescott Valley Town Council.

"For the first time in forever, we actually have a united front between rural and urban interests," he said.

Whitmer's email to the county water committee members includes a document attributed to agricultural interests that cites concerns about water augmentation authority powers such as eminent domain and taxing authority.

The bill stems from recommendations made by the Arizona Water Resources Development Commission, whose members included ag lobbyist Bas Aja, director of public policy for the Arizona Cattlemen's Association.

Tobin said Aja opposes the bill because of concerns that too much money would go to urban projects, but the loans would go to projects with the most need so rural projects should do well.

The bill limits the eminent domain powers in response to Aja's concerns, Whitmer said, and it doesn't grant new taxing authority. Aja was not available for comment Thursday.

"This is developed after two years of study bringing all the water groups together," said Tobin, a Republican from Paulden. "It's likely the most comprehensive water legislation since the (1980) Groundwater Act."

A subcommittee of the temporary Water Resources Development Commission identified at least 34 proposed water supply expansion projects across the state that would cost a combined $3 billion over the next 50 years.

They include the ongoing U.S. Bureau of Reclamation study in Yavapai County to identify future water needs and supplies, called the Central Yavapai Highlands Water Resource Management Study. It has concluded this region will need about 45,000 acre-feet of new water supplies by 2050. Current use is about 73,000 acre-feet.

"We now know we have a water problem," Tobin said. "To not solve it would make it worse."