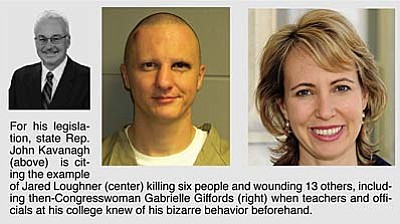 Rep. John Kavanagh, R-Fountain Hills, said all the proposals to keep people safe with new regulations on guns or even police in classrooms really won't stop someone from shooting up a school. He said the only thing that really works is stopping it before it happens.

Kavanagh, sponsor of HB 2555, cited reports that various teachers and officials at Pima Community College knew about what was described as bizarre behavior by Jared Loughner before he killed six and wounded 13 two years ago in a Tucson Safeway parking lot, including then-Congresswoman Gabrielle Giffords.

The same committee also approved HB 2618 to require additional training of police cadets on identifying those with dangerous mental illness so they can detain those people for additional mental health treatment.

But the panel also gave the go ahead for a third Kavanagh measure which would expand the ability of individuals to bring their guns into public buildings.

HB 2554 says that a mere sign banning weapons, by itself, would not be enough to make a building gun-free. Nor would be the availability of gun lockers somewhere else.

Instead, a government agency seeking to keep out armed patrons would have to provide lockers within 200 feet of the building entrance for individuals to store their guns.

That proposal drew sharp criticism from Rep. Ruben Gallego, D-Phoenix, in part because of the cost to taxpayers of having to install lockers at all public buildings.

"I'm sorry there are some people that live in a state of paranoia where they have to have their weapon with them at all times,' he said. "But I don't see how that has to be at taxpayer cost.'

"People are only paranoid because there are crazy evil people out there,' he responded. And Borelli, citing Gallego's Marine Corps experience, said he should know that.

"We've been in places where everybody's armed and you'd be surprised how polite people can really be.'

And Kavanagh said there's a simple solution for communities that don't want to install gun lockers: Let people carry their guns into the building.

None of this would affect courts, college campuses or other buildings that have guards and metal detectors, where guns still could be prohibited.

But it was the measure to mandate reporting of those with mental health problems that proved the most controversial.

Kavanagh said his legislation has safeguards. He said it requires someone to personally observe conduct that shows the person is a danger to self or others.

The only exception to that personal observation would be if there is "an actual communicated threat' and that the student or client has both the intent and the ability to carry out that threat.

Anyway, he said, calling the police does not necessarily mean anyone is going to be locked up in the state hospital. It simply gives officers the ability to analyze the situation and either call for a mental health crisis intervention team or detain the person for further observation.

None of that comforted Rep. Eddie Farnsworth, R-Gilbert. He questioned forcing teachers to call the police based on someone being considered a "danger to self or others.

"When you're talking about kids on a playground and they're throwing rocks or they get in a fight, that doesn't necessarily have anything to do with mental illness or health issues,' Farnsworth said.

"I think that language is exceptionally broad,' he said. "I think you're going to have teachers that are going to be reporting kids who are a danger, but not a real danger that we normally expect.'

Kavanagh assured lawmakers that the state Department of Health Services would distribute information to teachers to identify true problems "so it's not just their own subjective personal opinion.'

And Kavanagh told colleagues they don't need to look far for an example of why the legislation is needed, citing the Loughner case as a prime exhibit.

"School officials knew about this and nobody thought to call the police,' he said.

But Farnsworth saw other problems with the measure, pointing to another provision to give teachers absolute immunity from lawsuit for calling police, whether the teacher acted reasonably or not.

"If they act in a way that they're going to report somebody just to get back at a parent that was upset at them, why should they have immunity?' he asked.

But Rep. David Livingston, R-Peoria, said he sees the legislation from a different perspective because his wife is a teacher.

"She has been threatened with her life at school before,' he told colleagues.

"It took three different times complaining to the principal at that time before the police were brought in,' Livingston said. "Thank goodness nothing happened in between.'

He said this legislation would make it crystal clear that teachers not only have the right but the obligation to report such behavior to police.

Borelli, however, said he's not convinced that having teachers use their judgment about a student's mental health -- and calling police -- is necessarily a good thing.

He said that teachers were at the forefront of efforts years ago to convince parents their children were suffering from attention deficit disorder and should be medicated with Ritalin.

"What's wrong with a teacher who feels threatened to pick up the phone and call the parent?' he asked.

All the measures now go to the full House.