A Look Back at 2012: Arsonist fire-bombs hospital helicopter 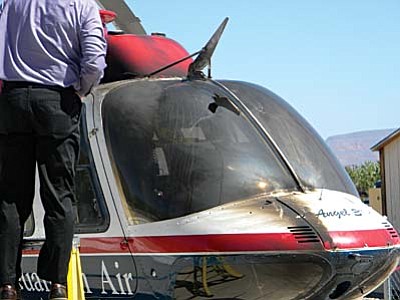 Angel-3 exploded in flames at 2:25 a.m. May 25 when a 26-year-old Cottonwood man, reportedly living as a transient in a wash, approached the craft with a beer bottle filled with gasoline setting the exterior and cockpit ablaze. VVN/Jon Hutchinson

COTTONWOOD -- One of the most unexpected criminal acts of 2012 was the fire-bombing of the Guardian medical helicopter assigned to the Verde Valley Medical Center.

Angel-3 exploded in flames at 2:25 a.m. May 25 when a 26-year-old Cottonwood man, reportedly living as a transient in a wash, approached the craft with a beer bottle filled with gasoline setting the exterior and cockpit ablaze.

Richard Thomas Butts Jr. was restrained by hospital personnel and the fire was extinguished. Still, the damage was great enough that the chopper was eventually trucked to Louisiana for repairs and has now been returned to service at substantial cost, the interior refitted and re-certified. Butts has been found to be competent to stand trial. His case is plodding through the courts, but an out of court settlement is rumored possible when attorneys meet in court in early January.

A 2012 alleged murder case, now in the courts, involves a Cottonwood woman and her estranged husband. Jamie Treakle Montiel, 23, had bonded out of jail after being arrested for failing to pay misdemeanor offense fines in Justice Court, but she then vanished.

Treakle reportedly failed to reach her boyfriend for a ride from the jail and is thought to have called her abusive husband Joseph Montiel, himself out on bond after assaulting Treakle with a pool cue.

Court records show the woman's body was eventually found near an old mine shaft off Cherry Creek Road. The Medical Examiner says she was stabbed to death.

Joseph Montiel's truck was found abandoned nearby and set authorities on the trail to the body.

Former minister Jim Schwartz was found dead months after a lengthy search and speculation on what happened to the hiker and Village of Oak Creek resident. At one point Sheriff's investigators speculated he had left home and his wife and numerous reports spotted him across northern Arizona.

That was never the case. Schwartz had certainly left a note with possible signs of a depressed state that day in October, but had left for a hike and apparently run into trouble.

In April, even though the official search had long ended, friends refused to give up and Don Newton conducted another search into remote Woods Canyon east of the Village between Good Friday and Easter and found a body, identified by his wedding ring as Schwartz.

The cause of his death remains unknown.

A Massachusetts college student was also found dead in the wild in April. Twenty-one-year-old Jessica Ronhock was found 25 miles south of Flagstaff. It's believed that her Jeep drove off the Interstate and plunged 400-feet.

Her credit card was last used in Kayenta on the reservation in January. A statewide search continued for Ronhock until hunters found the wreckage north of Sedona in April.

As track and field events were getting underway at the Summer Olympics in London this past year, a former Colorado distance runner was killed in Sedona along with his son and the boy's friend.

Pat Porter represented the US during Olympics in Los Angeles and Seoul in 84 and 88. Porter's private plane crashed during takeoff from the Sedona airport.

No murder charges were forthcoming after young Jake Palmer was stabbed during a fight with another 19-year-old in Verde Village. The pair had "bad blood" over the same girl and came to blows at the intersection of Pipe Creek and Grand View Drives. After being punched, Mason Anderson pulled a knife and stabbed Palmer who was pronounced dead at the hospital. The case proved to be one of self defense.

A 33-year-old teacher at American Heritage Academy, Randy Young, was terminated for a suspected inappropriate relationship with a young student but then was investigated for having child pornography on his personal computer that he had left at the school.

But the charges were dropped by the judge. The judge agreed with the defense argument that the teacher had a right to his privacy that was violated by the school during the investigation.

When school officials found Young's personal computer left behind in his classroom, they opened it and showed pornography to Sheriff's deputies.