Governor refuses to support immigration reform until border is secure 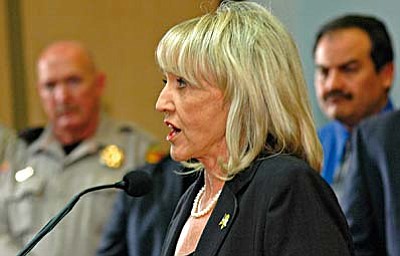 Gov. Brewer: "We can talk to the people that are affected personally by the border. And when they say that border is secure, then I think that we can rest peacefully.'

PHOENIX -- Gov. Jan Brewer can't put a specific definition on what it means to have a secure border.

But she said residents along the boundary with Mexico will know it when it happens.

The question of what Brewer thinks is politically significant since the governor said she will not support any form of immigration reform unless and until the border is secure. But until now she has offered no definition of what that means.

Her comments come as members of her own Republican Party in Congress are pursuing their own immigration reform plans in the wake of the defeat of presidential nominee Mitt Romney.

One of the places Romney -- and many Republicans -- came up short last year was that the emerging Latino vote went strongly for President Obama and Democrats. And that has caused some in the GOP to reexamine what it would take to prevent a repeat the next election.

In a statement following the November election, Brewer cheered the fact that illegal immigration is once again at the fore of the national dialog. But she said Congress should not rush to a solution that only makes things worse.

"Right now there are well-meaning people, including some in my own party, who are advocating a grand bargain in which the American people would be promised border security in exchange for the granting of amnesty to tens of millions of illegal aliens,' the governor said in a prepared statement.

"We've been here before,' she continued, citing the 1986 deal passed during the Reagan administration where about three million gained U.S. citizenship.

"The border was never secured,' Brewer said. Now, she wants that done first. And only at that point, Brewer said, should Congress address the broader issues of immigration.

On Monday, pushed for what she would consider secure, Brewer said a starting point would be to make the entire border as secure as the Yuma sector.

The Yuma sector which covers about 126 miles from the west end of Pima County to the Imperial Sand Dunes in California had about 5,800 apprehensions in a 10-month period ending last July 31. By comparison, the 262-mile Tucson sector which covers the balance of Arizona had more than 105,000.

"I think that would be a goal,' Brewer said Monday. But the governor said the real test is whether those along the border feel secure.

"We can talk to the people that are affected personally by the border,' she said. "And when they say that border is secure, then I think that we can rest peacefully.'

Members of Congress, however, may not be willing to wait until that point.

In a commentary for The Arizona Daily Star, Sen. John McCain, the state's senior senator, pointed out that illegal immigration is at an all-time low. He said that presents an opportunity to provide the technology and resources "to finally secure the border for good.'

But McCain did not set absolute security as a precursor for other action, saying he wants to work "as border security improves' on addressing the estimated 11 million people living in this country illegally.

And newly elected Sen. Jeff Flake, in a similar commentary, said while improved border security is important, so is setting up a temporary worker program to ensure that businesses have the labor they need "along with a realistic mechanism to deal with those working here illegally.'

Brewer said Monday she has not been contacted by any member of Congress about their plans. But the governor said she is watching "and, hopefully, in agreement with them.'