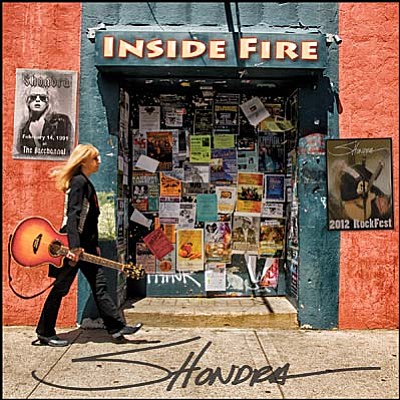 Shondra's Inside Fire is a re-master of rock 'n' roll from her days in Southern California in the 1980s and '90s. CD cover by Larry Pollock.

Shondra Jepperson has been around Sedona so long in so many capacities that she is an institution. In fact, she only needs to use her first name for recognition.

Vocalist, songwriter, musician, actor and voiceover talent (and she can emcee the heck out of an event), Shondra can be seen solo, in ensembles and, of course, with husband Tom Jepperson in a variety of Tom & Shondra shows. If you haven't heard Shondra, you have not been in Sedona very long.

But knowing Sedona Shondra is not exactly knowing Shondra. There was that San Diego Shondra in the 1980s and '90s who led quite a rockin' life.

That is the Shondra that leaps out of her compilation CD Inside Fire, re-mastered and released this fall.

For those accustomed to Shondra performing pop songs, standards or show tunes, the album is an eye-opener.

On her self-penned tunes, she rocks it so much, you can almost hear the big hair. But the sentiments of the songs still ring true to who she is today. Sure, there is the youthful rebellion of Rebel in My Heart and the defiance of I'm Not Your 2nd Hand Clothes, but she also knew what she expected from her relationships, something her writing makes clear.

Whether it's a rocker like Too Hot to Handle, a more thoughtful ballad like When I Go, a country-proud stomper like American Born, or the just plain fun Rock 'n' Roll Car, the one dozen songs on the album keep it real.

By the way, Shondra could really hit a high note.

In her current shows, Shondra may cover a rock number or two to mix things up. These songs, however, are personal. For her fans who think they know Shondra, Inside Fire exhibits the rest of the picture.

Find out more about the album at shondramusic.com.