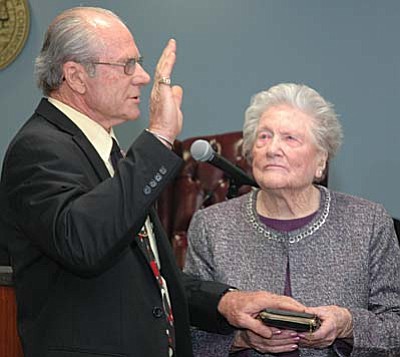 With his 103-year-old mother looking on, Bob Burns, newly elected to the Arizona Corporation Commission, takes the oath of office on Monday. (Capitol Media Services photo by Howard Fischer)

PHOENIX -- The new chairman of the Arizona Corporation Commission signaled Monday that the days of pushing solar and renewable energy over other sources are over.

In his first speech after being chosen by his colleagues to lead the panel for the next two years, Bob Stump said while he may be a betting man, he does not do so recklessly or with other people's money.

"And that's why I refuse to bet on, or cheerlead for, any one form of technology,' he said, saying he instead will "pursue a path in which adequate, reliable service is ensured and rates are just and reasonable.'

Stump made no mention of the two Democrats who were just defeated, creating an all-Republican commission, or the fact that prior commissions, with Republican votes, have mandated that utilities obtain at least 15 percent of their power from renewable sources by 2025. Proponents said the mandate not only ensures a diverse portfolio of sources for utilities as well as environmental benefits.

It also permits utilities to pass on some of their higher costs to ratepayers.

But Stump, while having promised during the campaign not to repeal that mandate, also made it clear he's not going to push forward with an expansion or acceleration of that schedule. Instead, he wants to make not only clean energy a priority but also the "cheapest forms of energy available so as to ensure power that is affordable, abundant and reliable.'

That includes some renewable energy, Stump said, as well as programs to get customers to use less. But it also includes "hydrocarbon-based forms of energy,' including coal and natural gas.

Stump is virtually certain to have the votes he needs: While seeking reelection, he campaigned as a team with newly elected commissioners Susan Bitter Smith and Bob Burns. And they issued joint campaign materials criticizing Democrats Sandra Kennedy and Paul Newman for their devotion to renewable energy, linking them to what they said were flawed national policies of President Obama.

Nor is much opposition expected from Brenda Burns and Gary Pierce, the other holdovers from the prior commission, who also fought with Kennedy and Newman.

Stump said he is not ruling out renewable energy as a source. But along with the other two sitting Republicans at the time, he already has staked out a broader position on exactly what that means.

But unsuccessful Democratic challenger Marcia Busching said that definition was meant for burning biomass, things like small twigs and plants. This agreement, she said, amounts to burning garbage, rubber and plastics in an incinerator.

Stump, interviewed later, said he also is a supporter of nuclear power, saying it plays "an essential role' in the state's energy mix.

He said, though, that officials from Arizona Public Service, the state's largest electric utility, have told him that they will be able to meet the needs for the foreseeable future with a mix of natural gas-fired power plants, renewable energy sources and increased efficiency, making consideration of new nuclear plants unnecessary at this time.

Separately, Stump promised to fight against the "intransigence' of the U.S. Environmental Protection Agency. It has ordered several coal-fired power plants that provide electricity for Arizona utilities to install new -- and expensive -- pollution control equipment to reduce visual pollution.

Stump said he wants to "put the interests of Arizona ratepayers first.'

He also wants the commission to determine if the time is right for Arizona to allow for competition in electric rates.

In essence, that would involve revamping how energy is sold. While customers would continue to get their power through wires from the local utility -- and pay for that cost -- they would be able to buy the electrons from a variety of suppliers.

Arizona dabbled briefly with the concept of electric competition a decade ago. But the plan never was implemented amid both procedural and legal questions.