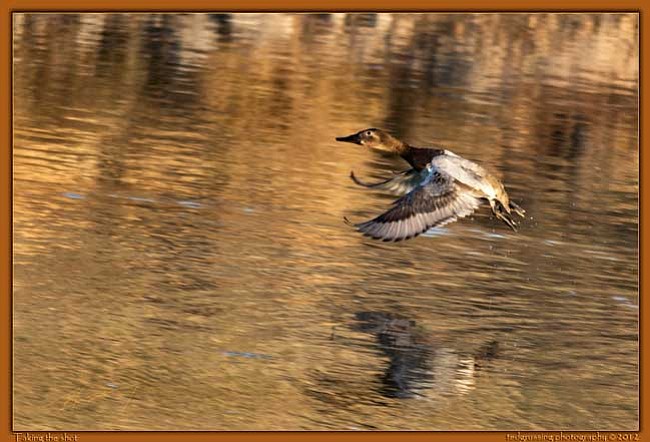 ... the shot; as I explained to the office manager at Lo Lo Mai Springs, I wanted to come in and see their pond so I could get some good shots of the ducks on the their pond. He explained to me that they do not allow hunting on the premises and it was obvious he and I were talking about two different kinds of hunting and shooting. While I used to hunt ducks and other game birds when I was a kid, all hunting these days is with the camera and it gives me the opportunity to shoot the same birds more than once and on more than just the one day. When we were on the same page he greeted me and allowed me passage. It is a good place to get shots of ducks on the water, but the main issue is keeping them far enough away from you to get a good shot. They are fed grain morning and evening and lots of other stuff from the residents. They mob you ; not flee from you. I took this shot of a hen Canvas Back at Bubbling Ponds Hatchery and the water droplets are still coming off her from her take off a few seconds earlier.

Mostly it seems I've shot wildlife so far this year and think I'll do some studio shooting of specimens and other stuff over the weekend; weather is supposed to be on cool side so inside is a good place to be.

Have a wonderful day ... smile, it bestows a blessing on all who are present and later those who witness the change in countenance of those who were there.

But leave one thing by which to cope

Leave me but hope.