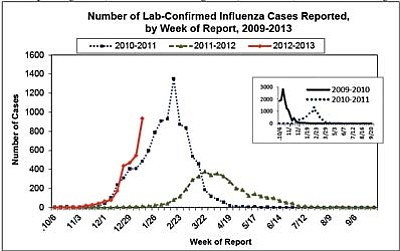 This Az Dept Health Services chart shows this season’s influenza with an earlier start and a higher number of cases than the 2011-2012 season.

COTTONWOOD -- A 5-year-old boy has died as a result of complications of influenza. The Yavapai County Health Department has not released specific details, but the child is reportedly from the Upper Verde Valley.

The incident is another caution to protect young children and the elderly from the flu with preventative flu shots, good hygiene and education.

This is the first confirmed influenza-associated pediatric death in nearly three years. Though most cases of influenza in otherwise healthy people can result in an uncomplicated illness, sometimes flu can open the door for another, more serious infection, which may have occurred in this case, the health department notes.

The Yavapai Health Department says the county has recorded only about 10 positive cases of flu. That may be misleading, since few people actually go to the doctor and are specifically tested, according to Yavapai Health Department Spokesman David McAtee. It is used as a benchmark, but the actual numbers of flu cases in Yavapai County is likely higher. Throughout the state the flu is said to be "widespread" though not epidemic.

Still, the numbers of hospitalizations for influenza identified by he Centers for Disease Control show the number of laboratory-confirmed flu cases is projected to double last year's influenza with infants and over-65 adults among the highest.

McAtee says the season has been commonly branded as "bad," though it is likely not as severe as it is persistent. "It is the typically achy, headache, feeling run down and tired. Not a terrible flu season. It just got started early and is dragging out longer. We had hoped that since it started early, it would end earlier. It is not."

McAtee repeats a common mantra among health professionals: "It is never too late to get a flu shot." He says, "There are always several strains of flu that we are fighting every year. We may have an A strain now, but you are going to get B protection from the flu shot.

Every year, the flu vaccine carries three strains, two A's and one B. Next year, they are going to four strains: two A strains and two B's.

Vaccination is the best way to protect yourself from the flu.

• Everyone 6 months of age and older should get vaccinated against the flu.

• Take everyday precautions, like washing your hands, to protect your health.

• If you are exposed to or caring for someone with the flu, talk to your doctor about preventive antiviral medications.

There are steps you can take in your daily life to help protect you from getting the flu.

• Wash your hands often with soap and water or an alcohol-based hand rub.

• Cover your nose and mouth with a tissue when you cough or sneeze. Throw the tissue in the trash after you use it.

• If you are sick with flu-like illness, stay home for at least 24 hours after your fever is gone without the use of fever-reducing medicine.