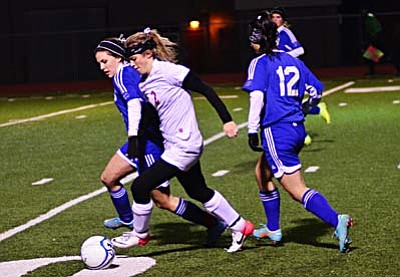 <b>Delaney Scanlan</b> fights for position and the control of the ball as she attacks the Bulldogs' defense Tuesday on Bright Field. VVN/Sean Morris

COTTONWOOD - Scoring five goals and allowing none--that's dominant. The No. 3 Mingus girls soccer team advanced past Safford in the first round of the Division III state tournament Tuesday night on Bright Field, 5-0.

In a physical contest the Marauders out-muscled the Bulldogs, possessed the ball for longer stretches, and clearly showed superior skill and teamwork.

The Bulldogs put the ball in the net shortly after the opening whistle, but it was called off because of a hand ball. Other than that, the Bulldogs didn't manufacture very many shots on goal.

"We stepped well to the ball on defense and that limited their opportunities," said senior defensive captain Ashleigh Makuch. "We pressured them before they had time to turn with the ball. Overall we kept great intensity on defense."

Intensity reverberated throughout the Mingus team, especially in senior Delaney Scanlan, who played forward against Safford (she's also a great defender). Bulldog defenders showed frustration toward Scanlan, jawing at her and trying to push her around. Scanlan would have nothing of it, giving it right back with a smile on her face.

"We have to leave it all on the field from here on out," said Scanlan. "If we lose it's over. We can't do anything but play hard for each other."

Scanlan was one of four Marauders to score on the night. Martina Bueno and Haley Backus chipped in with scores too.

Senior captain midfielder Nataly Escamilla scored two, one on a PK and another on an outside shot she sent to the lower left corner for the first goal of the game.

"Delaney had the ball and I was open in the middle. She dished it to me and I just shot it low to the corner," said Escamilla. Feeling great after a quality win, Escamilla said, "I think we can make it to the championship if we keep this up. We just need to keep playing well together and communicate."

Mingus head coach Buddy Rhodes smiled wide after the girls advanced past the first round. He said some people, before the season started, didn't believe his team could perform as well as they have. The girls committed themselves to the program, like they do every year, and they're championship contenders. Rhodes gave credit to the strength of the program from the ground up.

It was assumed Mingus would get to host Seton Catholic in a rematch from last year -- there's a whole convoluted story about why that's important involving a bad power-point formula, the greatest scorer in Mingus history coming off a sprained knee, a missing star center midfielder, and a last second shot-attempt sequence with several chances bouncing off the cross bar. It happened last year and it's already part of Mingus soccer lore, and the girls wanted a chance for revenge, but they wont get that chance because Catalina Magnet beat Seton, 7-3, Tuesday at Desert Vista HS.

Mingus will host Catalina Magnet Saturday at 2 p.m. The Mingus volleyball team beat Catalina in the first round of the state tournament this year and the match went five games.