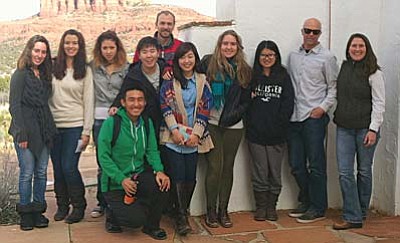 SEDONA - Where will you sit? A random ticket chosen when you walk into Brady Hall could get you a feast or a meager portion of nsima at Verde Valley School's Annual Hunger Banquet and Raffle.

Scheduled for Feb. 11, 6-8 p.m., the Hunger Banquet, modeled on a concept originated by Oxfam International, aims to raise awareness of global, and local, hunger.

VVS students, staff, parents and ticket holders will share a meal that demonstrates the inequity in nutrition among people around the world. As diners walk into Brady Hall they chose a ticket that divides them into different groups representing worldwide income levels. The income levels will determine the makeup of the meal students receive, demonstrating what people who live in a certain income bracket can afford to eat.

The few seated in the high-income area will enjoy a full dinner, featuring local grass-fed beef from the school's cows Entrée and Center of Plate, served at set tables; those representing middle-income will eat nsima and greens; the low-income group, which represents 50 percent of the world's population, will eat just nsima while seated on the floor. The event is sponsored by the Millennium Development Goals Group who work in villages in Malawi during the summer; nsima, a food made from ground maize flour, is the staple food of Malawi.

The event has two goals: to make participants aware of how hunger affects people around the world - like the fact that much of the world's population survive on less than $1 a day - and to raise money for and awareness of hunger issues both globally and locally. This is the Millennium Development Goals group's largest student run fund-raiser of the year, with 100 percent of proceeds going locally to the Cornville Food Bank and globally to provide secondary school fees for children in Malawi, Africa. Since 2007 VVS has worked in Malawi each summer. This summer's group will leave Sedona on June 2 for a 3-week service trip to Malawi.

The project extends beyond the students who will make the trip to Malawi. VVS theater students will present scenarios and monologues of how/why people move from one income class to another with stories from the US, Malawi, and China and Intro to Visual Arts students designed posters used to sell raffles and advertise the event.

According to the United Nations, some 925 million people do not have enough to eat. While many of those people live in developing countries, hunger is also an issue in local communities, with many Arizonans going hungry every day.

Last year's Hunger Banquet raised $2,500 allowing the MDG group to send 20 girls from the Malawian village where they work to secondary school. This year they hope to raise even more. In addition to opening the banquet to the public at $10 per ticket, the group is selling raffle tickets, including prizes from local merchants including:

Winners need not be present to win raffle items. You can purchase raffle tickets or tickets to the Hunger Banquet by calling Caroline Diehl at (928) 284-2272.