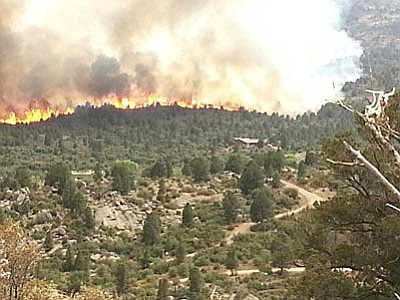 Nineteen members of the Granite Mountain Hotshots, part of the Prescott Fire Department, lost their lives Sunday while battling the 2,000-acre Yarnell Hill fire that ignited Friday south of Prescott.

The elite 20-man hotshot team is the only one in the country that is organized through a city fire department. It earned its national interagency hotshot designation in 2008.

Prescott Fire Department Fire Chief Dan Fraijo said the 20th crewmember was working in a different location on the fire and was not injured.

Sunday's fatalities amounted to the highest firefighter death toll on a single U.S. wildfire since 1933, when 25 firefighters were killed on the Griffith Park fire in Los Angeles.

Authorities confirmed the hotshots deployed their individual fire shelters, but declined to elaborate on the details leading up to the tragedy.

Fire shelters must be held down manually in order to operate properly and are designed to withstand intense heat, said Carrie Dennett, state forestry division fire prevention and information officer. Hotshot crews are typically deployed with the shelters as well as other tools.

An investigation into the cause of their deaths is currently under way, State Forestry Division Spokesman Mike Reichling said. Names of the deceased have not been released pending notification of next of kin.

"There will be a full investigation. We won't put out any information until we get full confirmation from the investigation team. It could be days or weeks," Reichling said.

As of Sunday night, an estimated 250 homes have been destroyed, Dennett said.

Firefighters on scene reported monsoons in other parts of the county created a wind-effect at the Yarnell Hill fire.

Prescott firefighters Conrad Jackson and Darrin Osborne both were on the crews that responded to the Yarnell Hill fire. They talked to The Daily Courier before the deaths occurred.

Osborne said Sunday's storm that brought rain and sparked a number of lightning-related calls in Prescott caused winds to shift over the Yarnell Hill fire, but Yarnell didn't get any of the rain.

"We're getting wind-effect off the thunderhead," he said.

Meteorologist Mark Stubblefield from the National Weather Service office in Flagstaff confirmed that outflow from the thunderstorm that hit Prescott caused strong winds to shift on the Yarnell Hill fire.

Roxie Glover, director of community relations and information officer for Wickenburg Community Hospital, said staff treated a number of residents for smoke inhalation on Sunday. Another resident, whose Yarnell home was destroyed in the fire, had to be transported to another hospital due to the nature of her injuries.

"She was injured during the evacuation. We did not receive any of the firefighters," Glover said.

The Yarnell Hill fire continued to grow over the weekend, leading to full evacuations of Yarnell, Peeples Valley and three nearby subdivisions. Yavapai County Sheriff's Office Community Relations Specialist Anthony J. Palermo said structures were burning Sunday night, but could not confirm how many.

Since it began Friday, the lightning-caused fire has burned through chaparral and grass and grown to 2,000 acres.

Arizona Department of Transportation closed a 15-mile stretch of Highway 89 Sunday afternoon following the evacuation order. The roadway closed for an indefinite period just north of Congress to south of Kirkland. Drivers traveling north or south were asked to use Highway 93 or Interstate 17 as alternate routes.

Firefighters began airdrops over the fire Sunday morning, Reichling said. While monsoons dropped rain over Prescott and other areas, Yarnell has received no moisture since the fire began.

A Type 2 Incident Management Team took control of the fire Sunday. Currently 350 personnel are assigned to the fire, but that number could grow to 400 firefighters by Monday when a national Type 1 team takes over the battle. Sixteen engines, eight water tenders, two rescue vehicles, two structure protection vehicles, one dozer, one hotshot crew, seven Type 2 hand crews, one camp crew, six helicopters, two air tankers and more were reported to be on hand to fight the blaze.

Using reverse 911, authorities advised residents to evacuate to an American Red Cross shelter located on the campus of Yavapai College in Prescott. Yavapai County Sheriff's deputies also went door to door to reach as many people as possible and assist them with the evacuation order.

"It's still pretty active. I suspect, in light of everything that's happened, we'll get the resources we need," Dennett said.

Hours after news of the tragedy went public, a Facebook page, "In Honor of Prescott Firefighters 6/30/13," appeared online honoring the fallen firefighters. The City of Prescott's website, which includes the home page for the Prescott Fire Department, appeared to be offline Sunday night.