Yarnell Hill fire is deadliest in history of Arizona 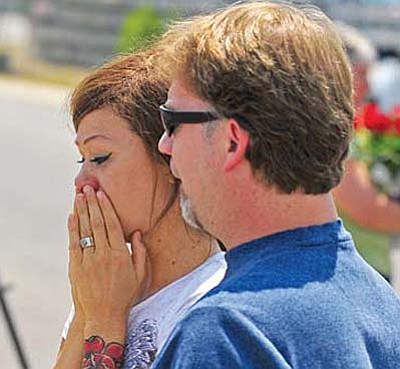 One by one Monday, Prescott Fire Chief Dan Fraijo read the names of the 19 Granite Mountain Hotshots who gave up their lives Sunday trying to save Yarnell homes from the Yarnell Hill fire.

The Prescott Fire Department did not release the name of the lone Granite Mountain Hotshot who survived the fire as he was working in a different location on the fire. Officials said it might be a few days before his name is released.

Gov. Jan Brewer ordered all state flags to fly at half-mast Monday through Wednesday before joining a news conference in Prescott Monday.

"This day will be eternally etched in Arizona's memory," Brewer said. "It will forever ring as one of our state's darkest, most devastating days."

"They were hard-working people," Prescott Fire Chief Dan Fraijo said at a news conference Monday afternoon shortly after the department released the names of its dead. "I never heard them complain."

The 19 men deployed their fire shelters but to no avail, officials said.

"That's a last ditch effort to save yourself," Fraijo said.

Strong winds were reportedly shifting directions as the monsoon's first strong storm blew through the region Sunday. The front brought rain and lightning to Prescott but a strong gust front brought only deadly wind shifts south to the fire line, where temperatures were topping 100 degrees.

Prescott Fire Department officials said Monday that they plan to release a group photo and short biographies of each firefighter on Tuesday. The photo of the team on its website is outdated.

A formal memorial service is being arranged and the date, time and location should be announced soon, officials said.

While Prescott Frontier Days daily rodeos began Monday on schedule, rodeo officials will be wearing black bands and conducting a moment of silence before each rodeo. They also plan to honor the firefighters at Saturday's parade.

The Yarnell Hill fire now stands as the deadliest wildfire in Arizona's history. It produced the highest firefighter death toll on a single wildfire in the nation since 1933.

Previously the deadliest fire in Arizona was the June 25, 1990 Dude fire, which killed six members of the Perryville prison squad including five inmates and a guard.

During a Doce wildfire briefing in Prescott a few weeks ago, fire officials noted that those same Perryville firefighters had been working on the 1990 Doce fire near Prescott before they moved to the Dude fire.

In an eerie twist, the Granite Mountain Hot Shots were working on this year's Doce fire before losing their lives at the Yarnell Hill fire. Both Doce fires ignited near the same location west of Prescott.

The Granite Mountain Hotshots team is the only Type I interagency hotshot team in the nation organized by a city fire department. The Type I hotshots are tops in the nation, often going deep into the woods on foot to attack the most dangerous wildland fires.

Family members of the 19 fallen Granite Mountain Hotshots gathered at the hotshots' station along 6th Street in Prescott late Monday morning to console each other and gather the belongings of their loved ones.

About the same time, Arizona Secretary of State Ken Bennett was talking about how his family members saw Juliann Sunday at church in Prescott with her four young children. Bennett was attending a news conference at Prescott High School Monday, and explained he was telling the story only because Juliann already had revealed to the public that her husband Andrew had died.

Bennett's daughter is a lifelong friend of Juliann after they grew up together in Prescott, Bennett related. Bennett's son and daughter-in-law saw Juliann at church Sunday before the tragic deaths unfolded.

"She talked about how she worries when he's out on these fires, but he always comes home," Bennett related.

Bennett's family later learned that Andrew was among the dead.

"Our hearts are just broken," Bennett said. "When the names are released today, we'll probably know another five or 10."

Firefighting jobs are among the best opportunities for young people to stay in Prescott and still make a living, he added.

"I bet everyone in Prescott has got to know one of these men, or knows someone who knows them," he said.

He praised their bravery.

"These firefighters were the best trained in the world," he added. "They were doing what they did because they loved it and wanted to protect people."

"The outpouring has just been incredible," said Tobin, a former Prescott resident who now lives in Paulden. "Everyone's in shock.

"I can't stop crying over this."

"It just tells us how fragile life is," Council Member Steve Blair said of the tragedy.

"I extend my personal condolences to the families and fire department," Council Member Jim Lamerson added. "My heart and prayers are with everybody."

Prescott will somehow move on, he said.

"Prescott is resilient and all this devastating loss is of a magnitude of proportions," Lamerson said. "Our brave and courageous firemen would want us to continue on,